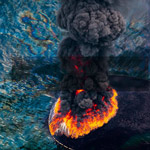 An oil tunnel through the public bottomlands of the Straits of Mackinac won’t protect the Great Lakes from a 645-mile long aging Line 5 oil pipeline that has leaked at least 33 times into Michigan's environment. Even when its oil isn't spilling into the water, it adds to our climate crisis when burned by spilling carbon into the atmosphere every day. The time to end the threat of a catastrophic oil pipeline rupture is now. Instead of leaving a vulnerable and hazardous oil pipeline operating in the Mackinac Straits for years while trusting a dishonest Enbridge to protect the Great Lakes, I support your action to revoke the Line 5 easement and urge to you prevent an oil tunnel from being constructed.

15,759 SIGNATURES
Help Reach the Next Goal: 16,000 signatures
Sharing tools
Like this to spread the word: