Enbridge has applied to double the capacity of the pipeline, also known as Line 67, to put it on par with the tar sands carrying capacity of the controversial Keystone XL pipeline. The State Department has previously made clear that any such expansion requires approval and comprehensive environmental review, and is currently undertaking that review.

A press release by the Sierra Club and National Wildlife Federation calls out the Enbridge scheme:

"Not content to wait for the legally required federal permitting process and environmental review, Enbridge has devised a scheme to transfer the dirty tar sands crude from Alberta Clipper to another pipeline, Line 3, just north of the border, then re-transfer it back to Alberta Clipper once it’s crossed into the United States. This blatant scheme to move up to twice the amount allotted in Enbridge’s permit seems to assert that the pipeline would only impact the few miles around the border crossing, a clear misinterpretation of both the letter and the spirit of the law."

It seems that Enbridge is comfortable making up its own rules by reasoning, “Ultimately this is about meeting shipper requirements for capacity,” Enbridge spokeswoman Lorraine Little said on August 20. 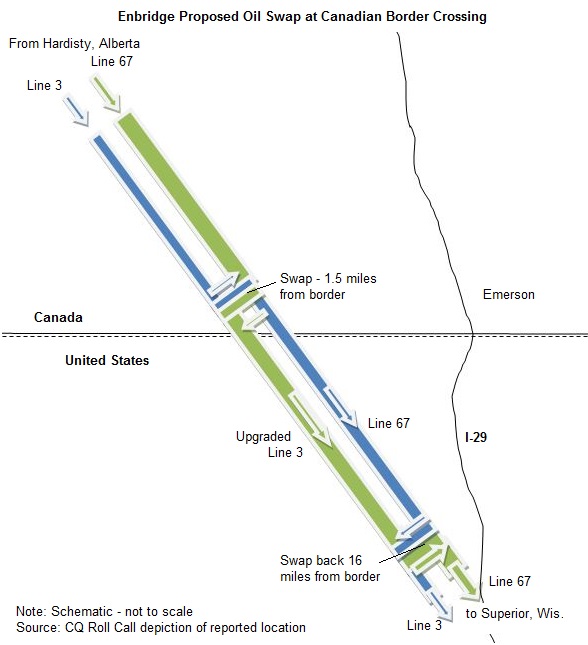 “When it comes to the climate crisis, President Obama’s central purpose ought to be, ‘Do no harm,’ ” Marc Fink, an attorney with the Center for Biological Diversity, said in a press release. “The administration’s approval of this Alberta Clipper scheme certainly violates that doctrine. President Obama said he wouldn’t approve Keystone XL if it significantly exacerbates the problem of carbon pollution. He must hold the same standard when it comes to the Alberta Clipper.”

Read more about this scheme: