Concern about potential oil spills from Enbridge's pipelines under the Straits of Mackinac drew a crowd of about 400 to the "Oil and Water Don't Mix" rally at Bridge View Park near the Upper Peninsula end of the Mackinac Bridge on July 14, 2013. 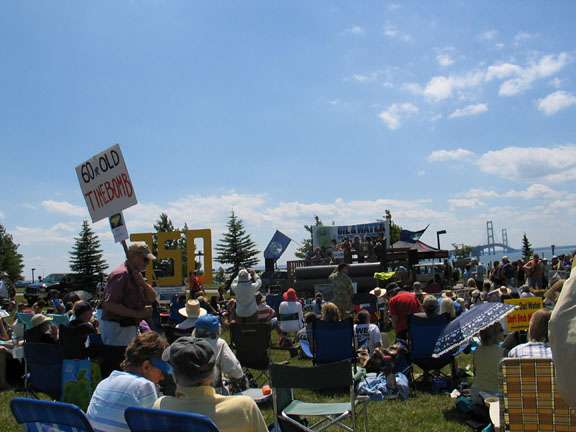 Organized by TC 350, the Traverse City, Mich., chapter of 350.org, the rally also featured speakers Beth Wallace, co-author of the National Wildlife Federation report, "Sunken Hazard: Aging oil pipelines beneath the Straits of Mackinac an ever-present threat to the Great Lakes," which inspired the rally; Cecil Pavlat of the Sault Ste. Marie Tribe of Chippewa Indians; Jess Spolstra of the Kalamazoo River Watershed Council, who described Enbridge's oil spill in the Kalamazoo River and its impacts; and Jarret Schlaff of the Detroit Coalition Against Tar Sands (DCATS).