LANSING – In formal remarks today to a state task force on oil pipelines, representatives of key environmental and Great Lakes groups – echoing the concerns of businesses, governments, and thousands of citizens – called on Governor Snyder to take swift and meaningful action to protect the Great Lakes from a catastrophic oil spill from a pair of 61-year-old Enbridge pipelines in the Straits of Mackinac.

“A growing number of communities, businesses, individuals, and organizations are calling on the state to determine what the potential harm to the Great Lakes and our Pure Michigan economy would be if these aging oil pipelines leaked in the Straits,” said Jim Lively, program director at the Michigan Land Use Institute. “The state has the opportunity and legal duty to get answers to the public’s questions and enlist Michiganders in determining the fate of these pipelines in order to prevent a disaster.”

“The state has the opportunity and legal duty to get answers to the public’s questions and enlist Michiganders in determining the fate of these pipelines in order to prevent a disaster.” - Jim Lively, program director at the Michigan Land Use Institute 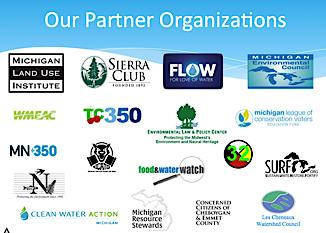 Leaders of a Campaign to protect the Straits of Mackinac from an oil spill were invited to present to the Snyder administration’s Michigan Petroleum Pipeline Task Force, which began meeting in August to study issues related to pipelines transporting petroleum products around the state. The task force has given particular attention to the Straits oil pipelines and is expected to make recommendations by spring.

The Oil & Water Don’t Mix campaign contends that Michigan is long overdue in applying state law – the Great Lakes Submerged Lands Act – to the aging “Line 5” oil pipelines, which take a shortcut through the Straits on a route from Superior, Wisconsin, to Sarnia, Ontario. The law requires the state to conduct an open public process evaluating the likely risks and impacts to not only the Great Lakes waters and ecosystem, but also the economy and affected communities, in the event of an oil spill. This public process, in turn, would address the question of whether the Enbridge oil pipelines in the Straits of Mackinac warrant greater regulation, repair, replacement, or removal. No such review has ever taken place under this Great Lakes law that protects these public waters and their use and enjoyment from harm. 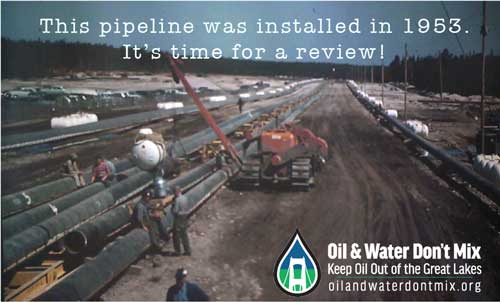 The campaign continues to gain support from Michigan business and community leaders, and already is backed by more than 2,600 supporters who have signed a letter urging Gov. Snyder to take charge and prevent a devastating oil spill in the Great Lakes.

“There’s rising urgency for the state to act, considering Enbridge’s recent admission of violating the easement agreement with the state related to properly anchoring the oil pipelines in the Straits’ powerful and fluctuating currents,” said Liz Kirkwood, an attorney and executive director of FLOW, a Traverse City-based Great Lakes public policy group. “Governor Snyder must act as a state trustee under public trust law to protect our Great Lakes, home to 20 percent of the fresh surface water on the planet.”

“Governor Snyder must act as a state trustee under public trust law to protect our Great Lakes, home to 20 percent of the fresh surface water on the planet.” - Liz Kirkwood, an attorney and executive director of FLOW

Members of the Oil and Water Don’t Mix campaign in July sent the governor a letter formally requesting he immediately open a transparent, public proceeding to evaluate the threat the pipelines pose and determine what actions should be taken to prevent a catastrophe. Mayor Margaret Doud of Mackinac Island, the mayors of Traverse City and Grand Rapids, and most recently, the Cheboygan County Board of Commissioners sent formal letters to the governor calling for state action on the oil pipelines in the Straits of Mackinac.

To date, Gov. Snyder has created the oil pipeline task force, which meets behind closed doors and strictly limits participation, but has not initiated the open review such a significant threat to the Great Lakes requires.  Every day nearly 23 million gallons of oil are pumped every day through the aging pipelines lying on the bottom of the Straits, just west of the Mackinac Bridge.

“Consistent with state public trust law, we’re asking the state to conduct an open public process to determine the potential harm from and the condition of the 61-year-old Straits oil pipelines, with the full involvement of local communities and landowners,” said James Clift, policy director at the Michigan Environmental Council. “This process is long overdue.”

Additional organizations leading the Oil & Water Don’t Mix campaign include the Environmental Law & Policy Center and the Sierra Club of Michigan. The groups – along with 14 other conservation, water, environmental, and tribal organizations – have united to raise public awareness of the unacceptable risk posed by the two 20-inch diameter pipelines through the Straits of Mackinac, one of the most ecologically sensitive areas in the world.  The pristine Straits area supports bountiful fisheries, provides drinking water to thousands of people, and anchors a thriving tourism industry with historic and beautiful Mackinac Island right in the center of it all.

Built in 1953 during the Eisenhower administration, the twin pipelines are owned by Canadian company Enbridge, Inc., the same company responsible for the spill of 1 million gallons of heavy tar sands oil into the Kalamazoo River in 2010, the largest oil spill on land in U.S. history. 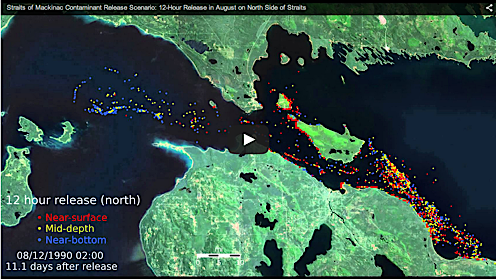 Computer simulations this summer by the University of Michigan and the National Wildlife Federation showed that strong, erratic currents make the Straits of Mackinac “the worst possible place for an oil spill in the Great Lakes," according to U-M researcher David Schwab. A possible million-gallon oil spill there would foul shorelines from Wilderness State Park in Lake Michigan to Rogers City in Lake Huron, including tourist hotspots like Mackinac Island and Beaver Island.

Video – University of Michigan summer 2014 simulation of a Straits of Mackinac oil spill.