Statement responding to troubling new revelations about the safety and integrity of Line 5 pipeline and Governor Whitmer’s new order.

Today, the Governor’s office responded to troubling new evidence that Enbridge Energy’s 66-year old Line 5 pipeline is likely in even worse condition than has previously been reported. The video footage of damage to Line 5 from an anchor strike last April shows that the damage to the pipeline was greater than Enbridge had previously revealed. The fact that Enbridge Energy has recklessly failed to maintain Line 5, while hiding its true condition from state authorities and the public is ample evidence that they are not a trustworthy partner for the state to be negotiating with, and should not be allowed to continue operating Line 5 in the Straits of Mackinac due to their blatant disregard for pipeline safety and integrity. 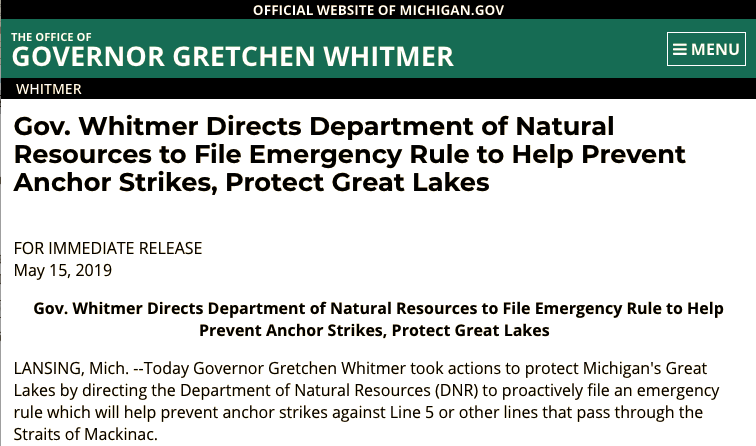 While requiring all vessels to affirm that their anchors are raised while traveling through the Straits of Mackinac will help guard against future anchor strikes, this step does not address the problem at hand.  We have a ticking time bomb lying at the bottom of the Straits of Mackinac that is operated by a foreign oil company with the audacity to hide the facts about the condition of their pipeline from state leaders and the general public. Further, no state order will stop dutiful Great Lakes captains and pilots from dropping anchor in case of an emergency in the narrow shipping lane under the Mackinac Bridge. The only way to protect the Great Lakes from a massive oil spill is to decommission Line 5 immediately. Building a tunnel does not address the other 400 water crossings that Line 5 makes through Michigan, and it does not address the fact that in Enbridge, the state is dealing with a monumentally untrustworthy corporation that is already responsible for the largest oil spill in state history. Today’s news is mounting evidence that the Governor must act immediately to revoke Enbridge’s easement and decommission Line 5.