The release of the pipeline task force report has garnered a flurry of media attention. 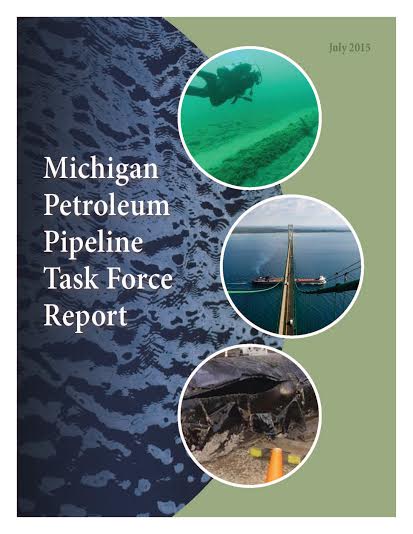 The Oil and Water Don't Mix campaign released an official statement and several campaign members such as FLOW, Food and Water Watch, Sierra Club, and MEC have released their own statements. Campaign members are being quoted left and right by The Oakland Press, The Petoskey News Review and WISN-Milwaukee.

Stories and editorials from Midwest Energy News, The Record Eagle and the Detroit News are saying that this task force report is setting the stage for the eventual shut down of Line 5. Some environmental groups such as the National Wildlife Federation and Circle of Blue have released overwhelmingly positive responses heralding the report as a major step towards pipeline shutdown. A spokesperson for the Sault Ste. Marie Tribe of Ottowa and Chippewa Indians said the Tribe was also pleased with the recommendations and is calling for immediate implementation.A report from Patch says that state of the world has changed such that the pipelines couldn't be built today. A Detroit News editorial says that these recommendations make the pipeline safer.

Other stories from The Record Eagle, Detroit Free Press,  MLive, and WNMU radio reflect the view that we shouldn't be too quick to celebrate. The pipelines still pose a real and present danger. David Holtz of the Sierra Club has compared this victory to "rearranging the deck chairs on the Titanic." Tim Skubick noted that the resolutions don't seem to amount to much of anything.