Now is the time to act as the Coast Guard admits it's unprepared for a heavy oil spill. Citizens groups are concerned that Enbridge plans to bring more heavy oil through Michigan pipelines.

Citizens groups today called on Gov. Rick Snyder to take immediate steps toward protecting Michigan from oil pipelines running through the Straits of Mackinac, in the wake of revelations that the United States Coast Guard cannot effectively respond to a major heavy oil spill in the Great Lakes. 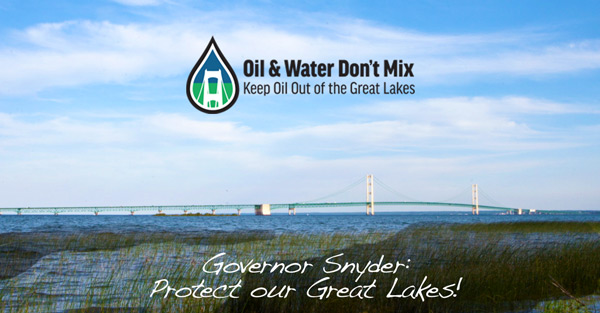 “The governor not only has the authority but the responsibility to protect the Great Lakes from the threat of a potentially catastrophic oil spill posed by two huge Enbridge oil pipelines across the straits,” said David Holtz, Executive Committee Chair of the Sierra Club Michigan Chapter. “The cost to our state’s economy and our Great Lakes system is just too great for this not to be an urgent priority for the governor.”

News reports last week revealed that lack of equipment, training, and funding left the Coast Guard—designated as first responders for any oil spill in the lakes—unprepared for a heavy oil spill. This is based on a 2013 Coast Guard study and statements made by Coast Guard officials who raise particular concern that heavy tar sands oil sinks below the surface, making traditional recovery methods ineffective.

“If our governor is serious about protecting the Great Lakes, he will heed the Coast Guard warning and prevent tar sands from moving through the Straits as a condition of the state's easement with Enbridge.” - Liz Kirkwood, executive director of FLOW in Traverse City

Environmental leaders say that in addition to keeping out tar sands oil, what’s needed is for the governor to assert authority under the Great Lakes Submerged Lands Act and start an open public process to evaluate the safety and future of the Line 5 pipelines that run through the Straits.

Given the increased risks and clean-up challenges posed by heavy tar sands oil, citizens groups say the governor should also move to modify the state’s 1953 easement agreement with Enbridge to ensure that heavy tar sands are not moving through Line 5. Enbridge says the heavy oils are not moving through the Straits, but the groups point out that this could change at any time without public notice or state approval.

“If our governor is serious about protecting the Great Lakes, he will heed the Coast Guard warning and prevent tar sands from moving through the Straits as a condition of the state's easement with Enbridge,” said Liz Kirkwood, executive director of FLOW in Traverse City. ”

At the same time Enbridge is saying there are no tar sands oils in Line 5, the company is investing between $36 and $43 billion in the next five years to expand its nearly 16,000 miles of pipeline systems. Many believe it is part of its plan to bring more tar sands oil in this direction. One of their biggest projects is to expand the Alberta Clipper pipeline, which connects the tar sands formation in Alberta to Superior, Wisconsin where Line 5 begins on the shores of Lake Superior. When completed, the Alberta Clipper will double its capacity to 880,000 barrels of oil per day. This expansion has been controversial because the company has broken up its expansion into pieces to avoid the scrutiny and public process involved in seeking a U.S. Presidential permit.

As for his response, Gov. Snyder has formed a task force to study oil pipelines across the state, including the Enbridge pipeline issue, over the next year or so, a process that is not open to the public.

“This can’t just be a problem you toss to a task force of agencies who work in the dark within a long, drawn out process that can be too easily influenced by Enbridge and the oil industry,” said Holtz. “This should be a much higher priority and the public needs to be involved. Should there even be oil pipelines in the Great Lakes? That’s the real question we need to ask and answer.”

The increased risks and difficulty of cleaning up tar sands oils became apparent when in 2010 an Enbridge oil pipeline spilled one million gallons of heavy tar sands oil into a tributary of the Kalamazoo River. This is the largest inland oil spill in U.S. history, and more than four years and a billion dollars later the cleanup is ongoing.

“The cost to our state’s economy and our Great Lakes system is just too great for this not to be an urgent priority for the governor.” - David Holtz, Executive Committee Chair of the Sierra Club Michigan Chapter

An oil spill in the Straits of Mackinac would be catastrophic. According to University of Michigan researcher, Dr. David Schwab, the Straits of Mackinac is the “worse possible place for an oil spill in the Great Lakes.” At any moment, there are more than 1 million gallons of oil in the pipelines beneath the Straits of Mackinac. So even if a pipeline leak were detected immediately and shut off, an enormous spill could occur. The University’s modeling found that strong and shifting currents at the Straits would disperse crude oil in both east and west directions, affecting large areas of Lake Michigan and Lake Huron shorelines. Passenger ferry service and drinking water would be cut to Mackinac Island.

“The Coast Guard report is more grave news about what we already know – we don’t want to have to clean up an oil spill in the Great Lakes,” said Kirkwood. “We should turn our focus from cleanup to prevention, and the best way to prevent a spill is for the state to look at whether the pipeline should be there in the first place. The governor needs to start that process immediately.”