Just one to two propane rail cars or a few tanker trucks a day could replace the Line 5 pipeline’s Upper Peninsula propane capacity without risking energy security in the U.P. or a catastrophic Great Lakes oil spill, according to experts for FLOW, a water law and policy center dedicated to upholding the public’s rights to use and benefit from the Great Lakes. 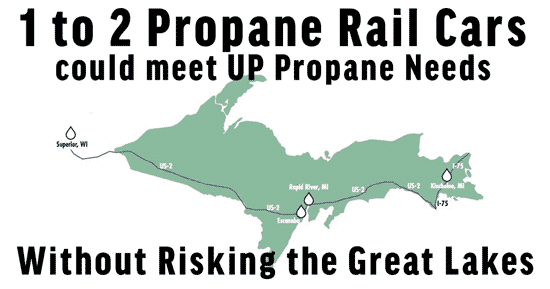 FLOW’s latest research shows that Line 5 supplies only about one-third to one-half of the Upper Peninsula’s propane, considerably less than the 65-85 percent that pipeline owner Enbridge asserts, based on FLOW’s estimates using publicly available data. And importantly, FLOW’s estimate represents a relatively small quantity of propane to transport, as the Upper Peninsula is sparsely populated and fewer than 1-in-5 U.P. residents lives in housing heated by propane. See the new FLOW fact sheet on Line 5 and U.P. propane supply option.

Enbridge’s inflated propane claims have needlessly fostered concern among local residents and state lawmakers that shutting down the aging pipeline to prevent a catastrophic oil spill in the Mackinac Straits would result in freezing Upper Peninsula residents in their homes.

Sign Our Petition
Help us keep up the pressure on the State of Michigan to do the right thing and #ShutDownLine5.

“It’s clearer than ever that Line 5 is not vital to Michigan’s energy security and, in fact, threatens our Pure Michigan economy and the drinking water supply to communities from Mackinac Island to metropolitan Detroit,” said Liz Kirkwood, an environmental attorney, and FLOW's executive director. “What’s needed now is a little ingenuity and a willingness to look for answers beyond the status quo with a steel pipeline transporting oil and liquid natural gas that was installed underwater in 1953.”

FLOW’s latest findings serve as an update to FLOW’s December 2015 expert report that concluded that decommissioning the twin pipelines in the Mackinac Straits to prevent a disastrous oil spill would not disrupt Michigan's or the Midwest's crude oil and propane supply, contrary to Enbridge assertions.

“It’s clearer than ever that Line 5 is not vital to Michigan’s energy security and, in fact, threatens our Pure Michigan economy and the drinking water supply to communities from Mackinac Island to metropolitan Detroit.” - Liz Kirkwood, an environmental attorney and FLOW's executive director

FLOW’s research is meant to inform deliberations by a state advisory board that meets next on March 13 in Lansing. The State of Michigan in partnership with the Michigan Pipeline Safety Advisory Board is overseeing the completion of two independent studies funded by Enbridge: one on the financial risk to communities and the Pure Michigan economy of a Line 5 oil spill in the Mackinac Straits and the other on alternatives to the aging pipeline that could avoid such a disaster. These two studies are expected by mid-2017.

FLOW supports decommissioning Line 5 to protect the Great Lakes, tribal fishing rights, and citizens’ public trust rights to navigate, boat, drink, fish, swim, and benefit from these precious waters. The State of Michigan must act with urgency to identify a viable plan for meeting Michigan’s energy needs without threatening the Great Lakes or public-owned bottomlands, which the Enbridge pipelines occupy under a 1953 easement with the state.

FLOW’s December 2015 research determined that available capacity and flexibility to meet energy demand in the Great Lakes region already exists in the North American pipeline system run not only by Canadian-based Enbridge, but also by competitors supplying the same refineries in Detroit, Toledo, and Sarnia, Ontario.

Furthermore, at least 90 percent of the 540,000 barrels per day of oil and liquid natural gasses moved through Line 5 end up in Canadian refineries, undermining claims that the pipeline is an important source of crude for the Marathon refinery in Detroit. See the new FLOW fact sheet on alternatives to Line 5.

"Our work to date has led to the conclusion that Line 5 in the Straits of Mackinac can be shut down, without resorting to additional oil trains, tank trucks, or lake tankers to serve regional refineries, as Enbridge would have you believe," said Gary Street, a retired chemical engineer and former director of engineering at Dow Environmental – AWD Technologies. "In addition, straightforward steps can be taken to assure customers in the Upper Peninsula of an on-going supply of propane, which is offloaded from Line 5 in Rapid River near Escanaba before ever reaching the segment that would be decommissioned in the Mackinac Straits."