TRAVERSE CITY, MI -- Decommissioning the twin pipelines in the Mackinac Straits to prevent a catastrophic oil spill would not disrupt Michigan's or the Midwest's crude oil and propane supply, contrary to assertions by the pipelines' owner, according to a Great Lakes law and policy group that released a set of expert reports today. 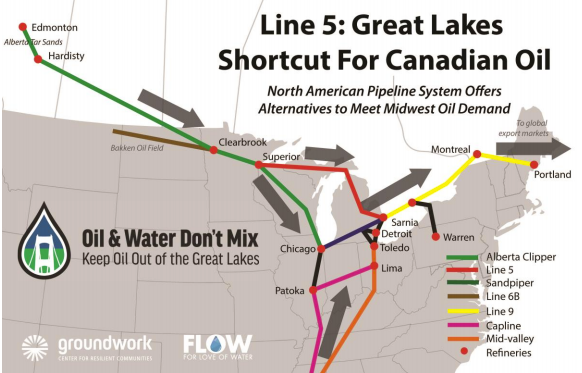 Available capacity and flexibility to meet energy demand in the Great Lakes region already exists in the North American pipeline system run not only by Canadian-based Enbridge, which owns the "Line 5" pipelines in the Straits, but also by competitors supplying the same refineries in Detroit, Toledo, and Sarnia, Ontario.

Furthermore, at least 90 percent of the oil moved through Line 5 ends up in Canadian refineries, undermining claims that the pipeline is an important source of crude for the Marathon refinery in Detroit.

The findings of the reports, co-authored by a retired Dow chemical engineer and a highly regarded hazardous materials risk management specialist, are meant to inform deliberations by a state advisory board meeting Monday afternoon in Lansing. The Michigan Pipeline Safety Advisory Board, created by Gov. Rick Snyder in September, is working to define the scope of independent studies that will consider the risk posed by the 62- year-old oil pipelines in the Mackinac Straits and alternatives that do not threaten the Great Lakes or public owned bottomlands, which the Enbridge pipelines occupy under a 1953 easement with the state.

"Enbridge has worked to keep the focus on continuing the operation of Line 5 and incremental actions to reduce, but not prevent, risk to the Great Lakes." - Rick Kane, a Michigan-based hazardous materials risk management specialist.

"Enbridge has worked to keep the focus on continuing the operation of Line 5 and incremental actions to reduce, but not prevent, risk to the Great Lakes," said Rick Kane, a Michigan-based hazardous materials risk management specialist. "Identifying options or alternatives that completely eliminate the risk becomes possible when the focus is placed on the regional pipeline system and not just on Line 5 or the pipeline network within Michigan."

The expert reports were commissioned by FLOW (For Love of Water), a Great Lakes law and policy center based in Traverse City, and directly refute claims by Enbridge that Line 5 is a “vital piece of Michigan energy infrastructure” that must remain in the Great Lakes indefinitely. Instead, the pipelines in the Straits, where Lake Michigan and Lake Huron converge, are revealed to be a high-risk shortcut to move up to 540,000 barrels of oil and propane a day primarily from western Canadian oil fields to eastern Canadian refineries, as well as on to Montreal.

The release of the reports comes amid increasing demands from citizens, business leaders, environmental groups, tribal governments, and elected officials to shut down Line 5 in the Straits of Mackinac because of the risk posed to the Great Lakes, navigation, fishing, boating and recreation, and which supply drinking water to communities from Mackinac Island to metropolitan Detroit and power the Pure Michigan economy. 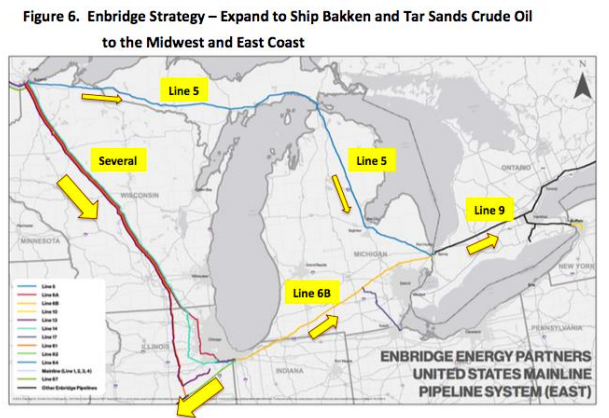 In replacing the failed Line 6B, the pipeline that spilled nearly one million gallons into the Kalamazoo River in the largest inland oil spill in U.S. history, Enbridge took the opportunity to double its capacity to 800,000 barrels a day in order to move a glut of Canadian oil eastward with the goal, in part, of serving global markets. Enbridge's agenda to build its own "Keystone XL" pipeline in the Great Lakes region was not disclosed to the state when approving this, and Line 5's threat to the Great Lakes was completely ignored. Ironically, the overall expansion would provide a significant amount of the replacement capacity needed if Line 5 in the Straits were decommissioned.

"Our work to date has led to the conclusion that Line 5 in the Straits of Mackinac can be shut down, without resorting to additional oil trains, tank trucks, or lake tankers to serve regional refineries, as Enbridge would have you believe," said Gary Street, a retired chemical engineer and former director of engineering at Dow Environmental – AWD Technologies. "In addition, straightforward steps can be taken to assure customers in the Upper Peninsula of an on-going supply of propane, which is offloaded from Line 5 in Rapid River near Escanaba before ever reaching the segment that would be decommissioned in the Mackinac Straits."

FLOW’s team of legal and scientific experts previously concluded in a September 2015 report to the Advisory Board that, because of the high level of risk and serious harm associated with the transport of crude oil in Line 5 under the Mackinac Straits, the State of Michigan should propose a specific action plan with prudent interim measures and simultaneously conduct risk and alternatives analyses. Such prudent interim measures would include halting the transport of oil through Line 5 in the Straits of Mackinac until the Advisory Board has completed the studies of risk and alternatives.

"Our work to date has led to the conclusion that Line 5 in the Straits of Mackinac can be shut down, without resorting to additional oil trains, tank trucks, or lake tankers to serve regional refineries, as Enbridge would have you believe," - Gary Street, retired chemical engineer and former director of engineering at Dow Environmental 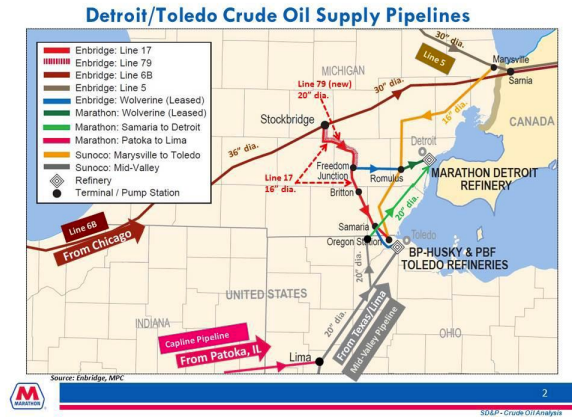 "We are urging the state advisory board to look at the big picture and consider the existing capacity in oil pipelines that go around, not through, the Great Lakes," said Liz Kirkwood, an environmental attorney and FLOW's executive director. "And while the studies proceed, the law requires that Gov. Snyder and Attorney General Bill Schuette take action to halt the oil flowing through the Mackinac Straits in order to protect the public trust uses of the Great Lakes, including for navigation, fishing, swimming, and drinking water supplies."

Copies of the expert reports released today, including an executive summary and full color maps of the Midwest and North American oil pipeline system, are available for download at www.FLOWforWater.org.