The potential impact of Enbridge Taking Michigan to Federal Court over Line 5. Today's This Week Monday.

Enbridge Makes a Federal Case Out of Line 5

Canadian oil transport giant Enbridge’s Thanksgiving eve legal bombshell challenging the constitutionality of Michigan shutting down the troubled dual Line 5 oil pipelines in the Straits of Mackinac may not succeed in federal court but it could still spell more trouble for the Great Lakes.

Enbridge asked the U.S. District Court Wednesday to take over Gov. Gretchen Whitmer’s state lawsuit aimed at decommissioning Line 5 by May and undo her action revoking Enbridge’s 1953 easement agreement to operate Line 5 in the Straits of Mackinac. The Whitmer administration described Enbridge’s move as a brazen attack on the people of Michigan and the Great Lakes. That it is and more.

Enbridge’s federal lawsuit could have far-reaching implications. They include a prolonged threat of a Line 5 failure beyond Whitmer’s May deadline for decommissioning the pipeline. If Enbridge’s lawsuit succeeds it also risks putting federal litigation on a path toward eroding more than a century of states' rights. It could surrender protection of the Great Lakes from oil spills to a controversial federal Pipeline Hazardous Materials Safety Administration that has a history of being captured by the oil industry. Since Enbridge’s suit involves federal policy and a federal agency the incoming Biden administration could decide to take sides in a legal dispute that pits at least two Canadian provinces against Michigan and its governor, a Biden ally. 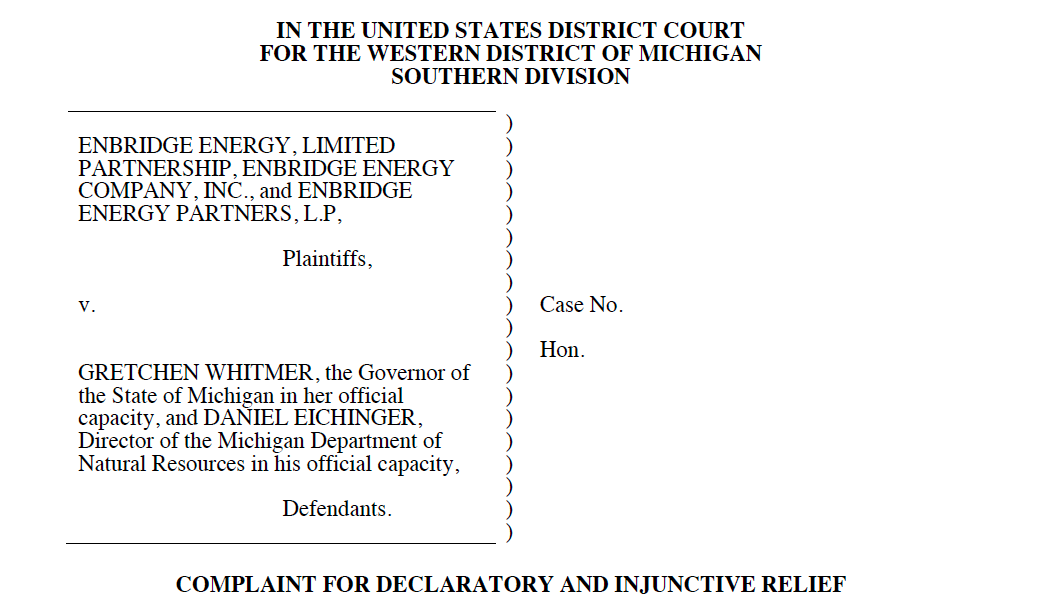 Fundamentally, Enbridge wants U.S. District Judge Janet T. Neff to not only declare Whitmer’s most recent legal actions unlawful but also render much of its 1953 Line 5 operating agreement with the State of Michigan meaningless by voiding specific terms requiring Enbridge to maintain the pipeline in a safe condition. Only the feds can do that, argues Enbridge, despite the company's failure to question the validity of the easement for the decades it has been operating Line 5 under that same agreement. It seems only when the terms of the easement are actually enforced by a Michigan governor does Enbridge challenge its legality.

The Enbridge lawsuit is a shift in focus from the company’s public relations message on Michigan energy to raising allegations of national and international consequences of Line 5 decommissioning. The Canadian company warns--without citing evidence and ignoring the unique and perilous location of Line 5 in the Great Lakes--that unless the federal court acts to intercede on its behalf there will be dire “copycat actions” by other states to shut down oil pipelines across the country.  Enbridge also predicts--again without evidence--there may be oil shortages in Ontario and Gov. Whitmer's actions “interferes with foreign affairs.”  Extraordinarily, the lawsuit claims that despite repeated strikes on Line 5 as recently as this year, the risk from an anchor strike is “vanishingly small” and uses a misleading calculation based on the odds of an anchor strike over the entire life of the 67-year-old pipeline.

What could become smaller if Enbridge’s legal attack is successful are public and state rights under the Public Trust Doctrine that became bedrock in a U.S. Supreme Court case, Illinois Central Railroad Co v Illinois. That ruling, not coincidentally, involved the State of Illinois and the Great Lakes, specifically Lake Michigan. It cemented state common law jurisdiction and responsibility for navigable waters like the Straits of Mackinac, cited by environmental attorney Jim Olson in a robust response to Enbridge's suit. One hundred and twenty eight years later that 1892 Supreme Court decision will likely now be at the center of legal arguments before Judge Neff, who was nominated to the court in 2007 by President George W. Bush.

Enbridge’s lawsuit focuses on the Supremacy Clause to the U.S. Constitution, which gives federal law primacy over state laws in many cases. Neff will be asked to decide where the Constitution’s Supremacy Clause ends and where the Public Trust Doctrine begins when it comes to Michigan’s right to protect the Great Lakes from an oil pipeline.

Neff has ruled on a federal preemption claim at least one other time. In a 2011 court case, Neff dismissed a lawsuit involving commercial email (aka SPAM), citing a federal law that preempted state laws covering commercial emails. In last week’s Line 5 filing, Enbridge claims the federal Pipeline Safety Act preempts the State of Michigan from shutting down Line 5 in the Straits.

The Line 5 issue before Neff is less clear than the email case because it involves well-established states' rights over navigable waters, so the legal hurdle for Enbridge isn't insignificant. Michigan will not likely be alone in defending against Enbridge's attack. Not just Michigan’s attorney general, but California, Minnesota, and Wisconsin attorneys general defended the Great Lakes State against Enbridge’s virtually identical constitutional preemption claims when they were made in Ingham Circuit Court earlier this year involving Michigan Attorney General Dana Nessel’s pending suit to decommission Line 5.

But Enbridge also has a short-run objective and that’s to delay the decommissioning of Line 5 beyond May. For Enbridge delay is victory even if it means prolonging the risk of a pipeline failure in the Great Lakes. Any holdup in shutting down Line 5 is money in Enbridge’s pockets since every day Line 5 continues to transport millions of gallons of oil and other hazardous liquids in the dangerous Straits of Mackinac, is a day Enbridge investors, executives, board members, and lenders are rewarded financially. And that--not Michigan or the Great Lakes--is Enbridge’s priority.

For comments, corrections, suggestions contact David Holtz at [email protected] The opinions expressed here are mine and mine alone unless I have appropriated them from others, in which case they are now mine too.--DH