Today in a meeting with members of Governor Whitmer’s staff and EGLE staff, tribal leaders reiterated what they’ve been saying since 2014: decommission that pipeline.

The Sault Ste. Marie Tribe of Chippewa Indians was invited to a May 3 tribal consultation between the Executive Office of the Governor and each of Michigan’s 12 federally recognized Indian tribes to collect input regarding the future of Line 5 and a possible tunnel under the Straits of Mackinac. Of the 10 tribes attending, all were united in their desire to see Line 5 shut down, in line with the United Tribes of Michigan resolution. 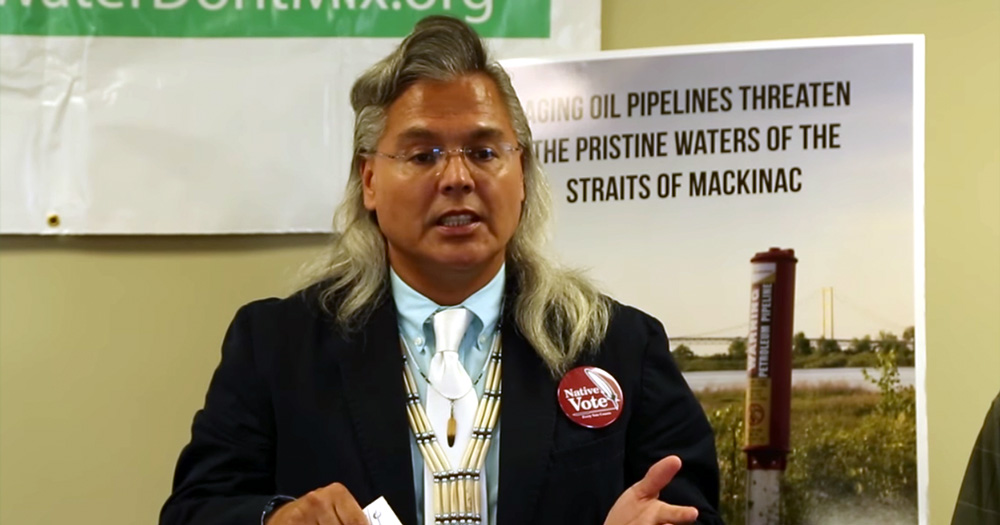 Gov. Whitmer has been negotiating with Enbridge regarding a tunnel to house Enbridge’s oil pipeline running through the Straits. But the Sault Tribe says that is unacceptable. “I’m not looking for a deal to be struck with Enbridge,” Sault Tribe Chairperson Aaron Payment said. “I’m looking for the governor to stand up for the people of Michigan.”

Enbridge’s Line 5, a 30-inch-diameter pipeline built in 1953 that extends a distance of 4.6 miles beneath the Straits of Mackinac, is as dangerous as ever. Line 5 was designed for a 50-year life and is now 16 years beyond its design life. This pipeline at any given time contains nearly 1 million gallons of crude oil beneath the waters of the Straits of Mackinac. For 4 to 6 months of the year, the Straits are ice-covered, making spill response nearly impossible. Numerous small ruptures have already occurred on land portions of this line, including a spill in early December 2014, on the bank of the Manistique River just 1 mile from Lake Michigan.

A half-billion dollar investment in a tunnel will be either a stranded asset (never used), or it guarantees climate disaster.” - Sault Tribe Chairperson Aaron Payment

The Sault Tribe’s position has not changed. “We have a new day, a new opportunity, a new governor,” said Payment.  “Unfortunately, the new governor has inherited this problem.”

Decommissioning Line 5 now is the only decision that makes sense. A catastrophic oil spill in the Straits of Mackinac would devastate the tribal fishing industry, as well as shut down water intakes for numerous communities and devastate the shoreline and island ecosystems and tourist industry — all for an investment that probably won’t be relevant by the time it is completed.

“A half-billion dollar investment in a tunnel will be either a stranded asset (never used), or it guarantees climate disaster,” said Payment.