A revealing new report by a respected, independent governmental watchdog organization documents how the Canadian oil transport giant Enbridge is buying influence with Michigan public officials as part of a multimillion-dollar media and lobbying campaign aimed at keeping its dangerous Line 5 oil pipelines in the Great Lakes and gaining approval for a proposed pipeline oil tunnel to possibly replace them.

Fight Back Against Corruption!
Sign the No Oil Tunnel Petition

The Michigan Campaign Finance Network in a new investigation found that after Enbridge bought $63,000 in paid sponsorships and ads with the Michigan Association of Counties, the group pushed through a resolution backing Enbridge’s Line 5. The report also raises questions about whether Grand Traverse County commissioners violated Michigan’s Open Meetings Act by discussing the Line 5 resolution privately through emails out of the public light. 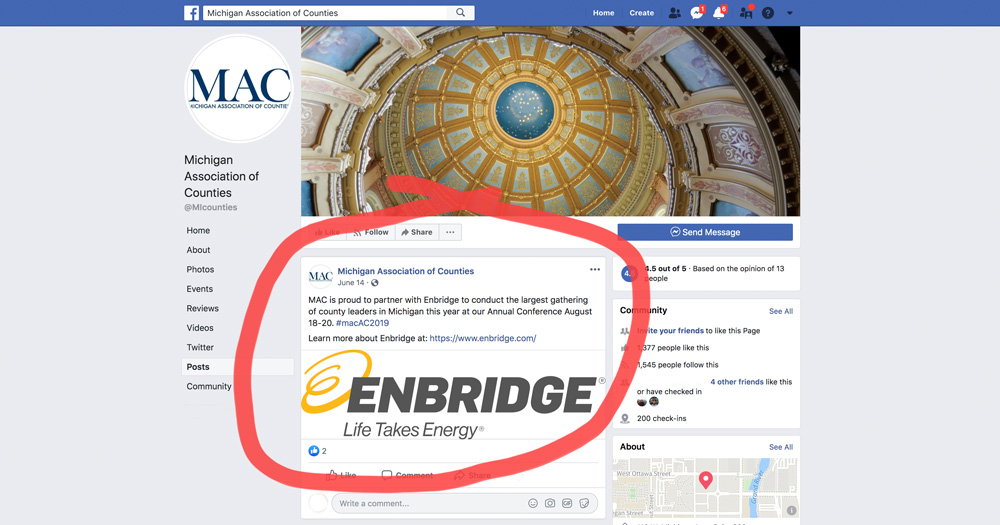 The counties’ group deployed its lobbyist to write pro-Line 5 resolutions for counties. Moreover, the watchdog group obtained an email from Enbridge lobbyist Deb Muchmore revealing Muchmore’s lobbying of an Oakland County commissioner, including providing “key messages” that have largely been debunked by the news media and other sources. That same document is also apparently being widely distributed to state lawmakers.

“Enbridge is purchasing influence and political support in Michigan, plain and simple, and they are poisoning our politics along with our Great Lakes environment,” said Sean McBrearty, Oil & Water Don’t Mix coordinator. “Our elected representatives are supposed to represent the people. We can’t trust them to do that when they are financially beholden to Enbridge and their oil and gas industry allies.”

Enbridge’s wide-ranging campaign to persuade Michigan to keep Line 5 pumping oil through the Straits of Mackinac has seen the Canadian corporation and its partners pumping money into print, online, and radio ads in virtually every media market and sponsorships of public radio stations, who in exchange for Enbridge’s money repeat Enbridge’s messages, often multiple times a day. For the first seven months this year, Enbridge spent $105,728 on lobbying, more than the entirety of 2018, according to the Michigan Campaign Finance Network.

“Enbridge is purchasing influence and political support in Michigan, plain and simple, and they are poisoning our politics along with our Great Lakes environment.” - Sean McBrearty, Oil & Water Don’t Mix coordinator

Enbridge’s intensive spending in Michigan on paid lobbying and media ads this year mirrors a similar oil pipeline campaign in Minnesota where the Canadian company has spent $13 million trying to force governmental approval of a pipeline there. It follows the action by Enbridge last year to funnel more than $126,000 into a Michigan Chamber of Commerce PAC that unsuccessfully challenged the Voters Not Politicians redistricting reform measure passed overwhelmingly by voters.