With cost estimates ranging from $2 to $6 billion, what is the likelihood that Enbridge would stick Michigan taxpayers with the tab for a worst-case oil spill in the Mackinac Straits?

That question has gone unanswered by state officials backing Enbridge’s Line 5 and in the Risk Analysis Report that is the subject Monday of the state’s public meeting in scenic Harbor Springs. Enbridge, which carries just $700 million in liability insurance for its entire international operations, has told the state it would fund a major Great Lakes oil spill cleanup and pay for damages from its corporate assets. 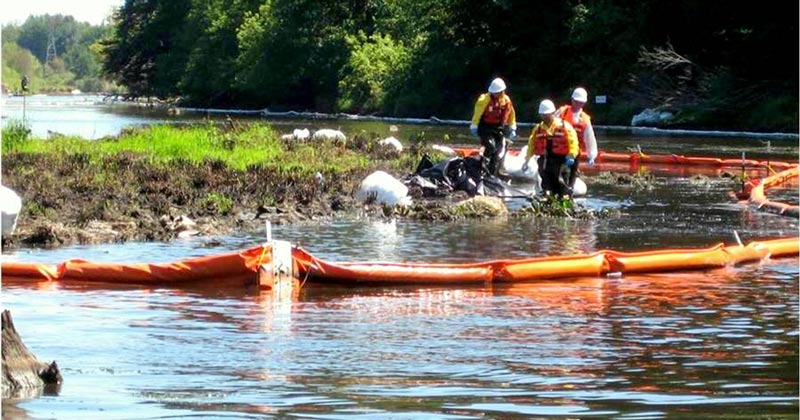 Enbridge’s promises, however, are no guarantee that Michigan wouldn’t get stuck with the bill for an oil spill that would devastate the local economy, damage coastal property, wreak havoc on municipal water systems and destroy natural resources, including an economically vital tribal commercial fishing industry.

“If you are Enbridge and you are responsible for a pipeline rupture that shuts down Mackinac Island for weeks in peak tourist season and destroys fishing, tourism and water systems you might well consider federal bankruptcy court a good option,” said Leonard Page, a local Cheboygan area property owner. “Why should Michigan and taxpayers like me take that risk with an oil pipeline we don’t need? It makes no sense except to Enbridge and, apparently, Gov. Snyder and Attorney General Schuette.”

Following the $12 billion Deepwater Horizon disaster, Congress created the Oil Liability Trust Fund in 1990 to cover oil spill costs that were not paid for by insurance companies or responsible corporations. The trust fund, however, has just $1 billion to cover the entire nation and is financed by the oil industry. Enbridge’s 2010 oil spill along the Kalamazoo River in Marshall caused an estimated $1.2 billion in cleanup costs, damages and restoration. A major spill in the Mackinac Straits could carry a price tag several billion dollars higher.

“Why should Michigan and taxpayers like me take that risk with an oil pipeline we don’t need? It makes no sense except to Enbridge and, apparently, Gov. Snyder and Attorney General Schuette.” - Leonard Page, Cheboygan area property holder

The Risk Analysis Report that is the subject of Monday’s 6pm-9pm meeting at Boyne Highlands Resort pegs the cost of a worst-case spill in the Mackinac Straits at $2 billion. An earlier report by university researchers commissioned by the Traverse City group, FLOW, estimated damages and recovery costs for a widespread Line 5 spill in the Great Lakes could reach $6 billion.

According to a 2015 Michigan Petroleum Pipeline Task Force Report, Enbridge has “offered conflicting, incomplete, and inadequately supported estimates of its total liability” under its 1953 easement agreement with the state. That agreement, violated numerous times by Enbridge, requires just $1 million in liability insurance from the Canadian oil transport giant. Following its $37 billion acquisition in early 2017 of another energy firm, Spectra, Enbridge’s finances have recently raised questions in the financial media.

A task force co-chaired by Attorney General Bill Schuette issued the 2015 pipeline task report but Schuette has thus far failed to explain how easement terms requiring Enbridge to hold Michigan harmless for “all damages and losses” due to a pipeline rupture are being enforced.

“Michigan gets all the risk and Canada all the benefits from Line 5,” said Sean McBrearty, Oil & Water Don’t Mix campaign coordinator. “Unfortunately it appears Michigan will have to wait to see whether our next governor and attorney general prioritize protecting Michigan and the Great Lakes and enforce the easement agreement with Enbridge.”