Fast-track legislation hurriedly cobbled together and approved by the state House today that provides badly flawed special-interest protection for the Canadian oil transport giant Enbridge to build an oil tunnel in the Mackinac Straits faces near-certain legal challenges and should be vetoed by the governor, groups representing the Oil & Water Don’t Mix coalition said today following passage of Senate Bill 1197.

“If Rick Snyder wants to repair his legacy as governor he needs to read the Michigan Constitution before condemning Michigan and the Great Lakes to 10 years or more of a high-risk oil spill in the Mackinac Straits,” said Liz Kirkwood, Executive Director of FLOW and an environmental attorney. “This is an opportunity for the governor to pause, reflect and do the right thing by not signing into law this badly flawed legislation.” 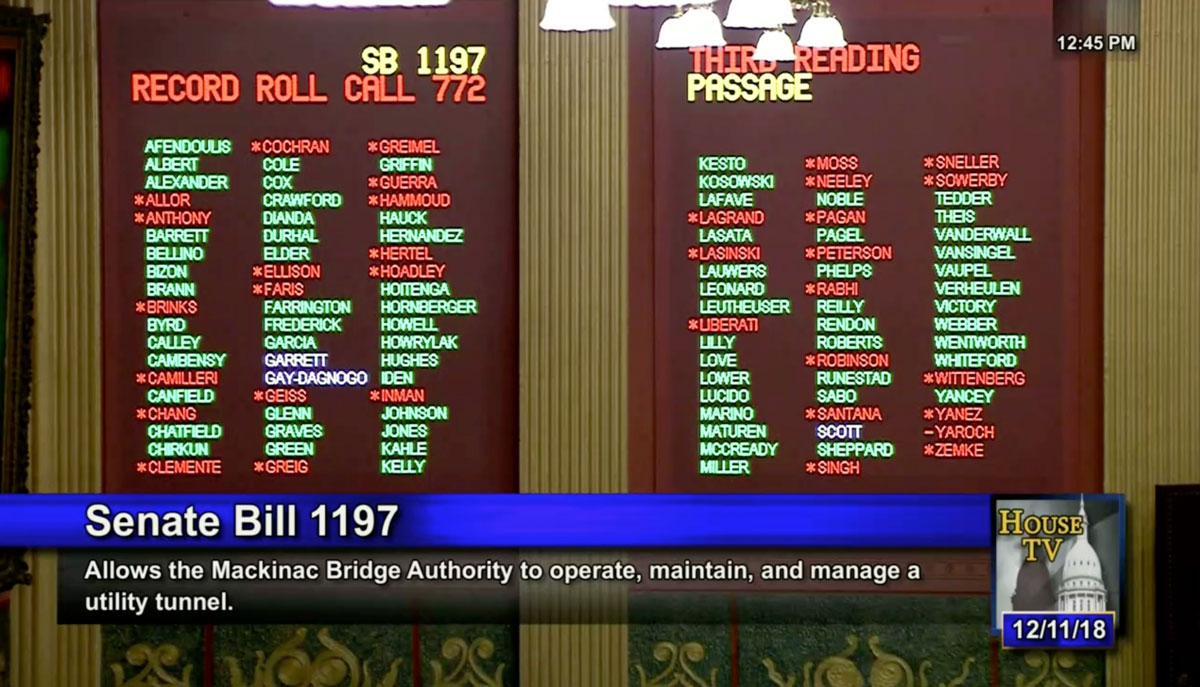 Kirkwood, along with business, civic and environmental groups, spoke in opposition to the bill at House Government Operations Committee meeting today before the panel voted along partisan lines to send the bill to the full House. The House then voted in favor of the bill, which now goes to Gov. Snyder.

Several people testifying before the government operations committee today criticized the legislation, citing the fact that the Mackinac Bridge Authority remains in the bill and that the controversial Line 5 oil pipeline would remain on the lakebed for 10 years or more while the tunnel is constructed.

Kirkwood predicted that by bypassing comprehensive financial review and legal analysis lawmakers have produced a dubious legal document that will likely be overturned by Michigan courts.

According to a MIRS news service report Monday, legal experts, including the chair of the Michigan Law Revision Commission, Richard McLellan, have raised constitutional issues with the tunnel legislation because it involves too many topics in one bill. Kirkwood and other environmental attorneys, meanwhile, say the legislation also runs afoul of Michigan’s constitutional mandate to protect the state’s natural resources. In addition, it creates potentially illegal special-interest benefits for a private corporation while exposing the state to liability and financial consequences, she said.

“When Enbridge’s lawmaker friends threw this bill together they created legislation with so many contaminated ingredients that if it were sausage it would trigger consumer health warnings,” said Sean McBrearty, Oil & Water Don’t Mix campaign coordinator. “When you put garbage in, what you have coming out is garbage and this convoluted legislation that keeps the Mackinac Bridge Authority in charge of an oil tunnel but also creates a brand new authority in the same law to do the same thing deserves to be trashed. It is a hopelessly confused piece of legislation.”

At today’s Government Operations Committee meeting, former longtime Mackinac Bridge Authority chair Bill Gnodtke told lawmakers, “this bill should have been drafted without any reference to the MBA (Mackinac Bridge Authority).” Barbara Brown, who currently serves on the bridge authority, also spoke against the bill as did representatives from Hopcat brewery and the Great Lakes Business Network.

“If Rick Snyder wants to repair his legacy as governor he needs to read the Michigan Constitution before condemning Michigan and the Great Lakes to 10 years or more of a high-risk oil spill in the Mackinac Straits." - Liz Kirkwood, Executive Director of FLOW

Richard Bergman, who owns five hospitality businesses in the Charlevoix area, told the panel that the legislation fails to consider the impact of a Line 5 spill on northern Michigan businesses and residents who depend on the Great Lakes for drinking water. The legislation, he said, primarily benefits Enbridge.
.
”As the owner of a small Michigan business, there are thousands of regulations that we are required to follow in order to remain in business. We do not get any of these considerations or benefits that you are giving a foreign oil company,” said Bergman. “I say as a taxpayer and business owner, you need to hold Enbridge to the same standards as other businesses in the state.”

Patty Peak, Chair of Straits of Mackinac Alliance property owners group who lives near the bridge, pointed out that “every day 23 million gallons of oil is being pushed through an antiquated pipeline,” and reminded lawmakers that less than a year ago a ship’s anchor strike near ruptured the 65-year-old pipeline.