An independent expert report released today shows that if the Line 5 pipeline in the Straits of Mackinac is decommissioned, truck and rail can replace the supply of propane to the Upper Peninsula with an estimated consumer cost increase of approximately 5 cents per gallon, which would be lost in the normal fluctuation of propane prices. The report was conducted by London Economics International, LLC (LEI) under a contract with the National Wildlife Federation (NWF) with funding from the Charles Stewart Mott Foundation.

“The lowest-cost alternative options to Enbridge Line 5 would be truck or rail from Superior, Wisconsin,” LEI stated in the report. “The price increase to consumers in the Upper Peninsula would likely be about $0.05 per gallon. This small price increase would be lost in the noise of typical propane price volatility.”

The 65-year-old Line 5 – operated by Enbridge Energy – carries up to 23 million gallons of oil and natural gas liquids per day from Superior, Wisconsin, to Sarnia, Ontario, taking a shortcut through Michigan and along the lake bottom of the Straits of Mackinac. Approximately 81,000 gallons (0.35 percent of pipeline capacity) of natural gas liquids (NGLs) per day are extracted at Rapid River for propane distribution in the Upper Peninsula. 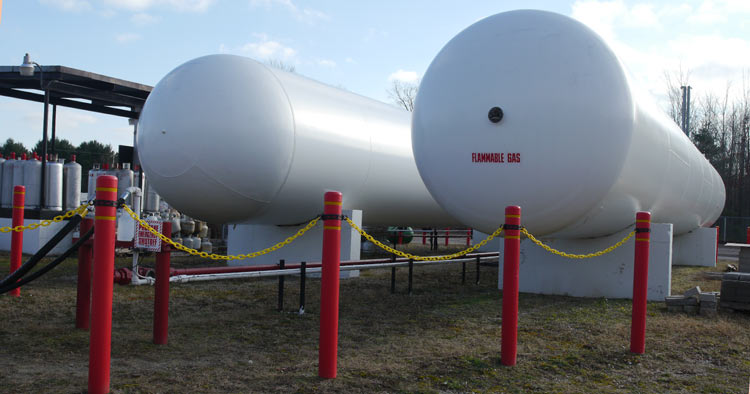 “With strong recent and projected growth in supply of NGLs from the United States, and with flat to declining demand for propane in Michigan, the prospect of persistent propane supply shortages in Michigan is unlikely, even if Enbridge Line 5 ceased to operate,” LEI stated in the report.

Line 5 has been plagued by a series of structural issues, ranging from missing protective coating to three dents left by an anchor strike just this past April. A 2017 NWF report based on public records found that the inland sections of Line 5 have spilled over 1 million gallons since 1968, approximately the same amount spilled by Enbridge’s Line 6B into the Kalamazoo River in 2010. Last week, the State of Michigan released an Enbridge-funded report led by Dr. Guy Meadows of Michigan Technological University which estimated a worst-case Line 5 spill to cost more than $1.8 billion in economic impact and cleanup, polluting 441 miles of shoreline and risking 60,000 acres of unique wildlife habitat for 47 wildlife species of special concern.

“This report shows that Line 5 is not critical to propane supplies in Michigan,” said Mike Shriberg, Great Lakes Regional Executive Director for the National Wildlife Federation and a member of the Michigan Pipeline Safety Advisory Board. “A small investment of resources from propane consumers would eliminate the risk Line 5 poses every day to 441 miles of Great Lakes shoreline, northern Michigan’s regional tourism economy, 60,000 acres of critical wildlife habitat, and irreplaceable tribal and cultural resources.”

LEI compared assumptions in a 2017 Dynamic Risk report (funded by Enbridge and commissioned by the state) to publicly-available data and then used them to evaluate the impact on the cost per gallon of propane. It found that the 2017 report overestimated the cost of rail car leases and the hourly wage for truck drivers to reach its higher estimate of a 35 cents per gallon increase, among other factors.

“This report shows that Line 5 is not critical to propane supplies in Michigan.” - Mike Shriberg, Great Lakes Regional Executive Director for the National Wildlife Federation

LEI found that transporting propane by either truck or rail would increase the price of the gas by 11 cents per gallon, of which 5 cents per gallon would be passed on to consumers in the Upper Peninsula. Propane pricing currently fluctuates 58 cents per gallon per year, meaning this small 5 cents per increase would be lost in the noise of normal price fluctuation. In the Lower Peninsula, LEI found that the cost increase to consumers from propane delivered from Sarnia would be negligible since Sarnia’s natural gas liquids supplies can be replaced by other nearby supplies. The average price of propane for residential consumers in Michigan last winter was approximately $2.00 per gallon.

The report also analyzed options including building a new 4-inch pipeline from Superior, Wisconsin to Rapid River, Michigan, expanding storage at Kincheloe, Michigan, and using the existing Line 5 segment to Rapid River below capacity. Each of those alternatives was more expensive than trucking or rail.

“For less than the normal price volatility of propane, we can replace how residents in the Upper Peninsula get their propane. And if the state commits more resources to help U.P. residents with high energy costs, U.P. residents would come out ahead,” said Shriberg. “We cannot replace what Line 5 threatens: our water, our wildlife, our economy, and our way of life.”