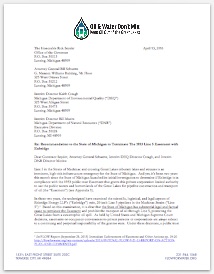 New findings show Enbridge is violating safety conditions at Line 5 in the Straits of Mackinac.

Read all about the report in our news article here.

The request letter is posted below, and the complete package of documents supporting this request are available to download or view from this web page.

View or Download (12Mb): Link includes Sign-On Letter, Memorandum in support of terminating the 1953 Easement between Enbridge and the State of Michigan, & Appendices.

Re: Recommendation to the State of Michigan to Terminate The 1953 Line 5 Easement with Enbridge

Line 5 in the Straits of Mackinac and crossing Great Lakes tributary lakes and streams is an imminent, high-risk infrastructure emergency for the State of Michigan. And yet, it’s been two years this month since the State of Michigan launched its initial investigation to determine if Enbridge is in compliance with the 1953 public trust Easement that grants this private corporation limited authority to use the public waters and bottomlands of the Great Lakes for pipeline construction and transport of oil (the “Easement”) (see Appendix 1).

In these two years, the undersigned have examined the scientific, logistical, and legal aspects of Enbridge Energy LLP’s (“Enbridge”) twin, 20-inch Line 5 pipelines in the Mackinac Straits (“Line 5”). Based on this examination, it is clear that the State of Michigan has substantial legal and factual cause to terminate the Easement and prohibit the transport of oil through Line 5, protecting the Great Lakes from a catastrophic oil spill. As held by United States and Michigan Supreme Court decisions, easements or occupancy conveyances to private persons or corporations are always subject to a continuing and perpetual responsibility of the grantor state. Under these decisions, a public trust conveyance or easement is revocable and is necessarily subject to modification if the state determines that new circumstances require such a change to protect the public trust.

The State of Michigan is now knowledgeable of the high risks and substantial consequences that a rupture in Line 5 poses to the Straits of Mackinac and the Great Lakes that termination of the Easement is imperative. By this letter, you are put on notice that Enbridge currently is operating in violation of the 1953 Easement with the State of Michigan based on at least the following eight known and ongoing breaches of express terms and conditions:

Although it may be that none of these ongoing breaches can be remedied within the Easement’s 90- day cure period, the State of Michigan should immediately give written notice of these breaches to demand compliance with and enforce the obligations and liability of Enbridge under the Easement. The State should also put Enbridge on notice that it is in violation of the obligations that are inherent in public trust in the waters, bottomlands, fish, aquatic habitat, and protected uses. Enbridge’s continuing and ongoing violations of the 1953 Easement, public trust law, and the Michigan Environmental Protection Act (“MEPA”) are more fully described in the attached Memorandum.

Evidence of these violations has continued to mount. In early 2016, Enbridge finally disclosed new information about pipeline dents, 36 cracks and 26 percent loss of pipeline wall thickness in portions of Line 5 in the Straits, calling the integrity of the pipeline’s infrastructure and operation into serious question. Just two weeks ago, the University of Michigan released a comprehensive computer modeling study demonstrating that more than 700 miles of shoreline in Lakes Huron and Michigan are potentially vulnerable to an oil spill from Line 5. Moreover, public concern is at a fever pitch; over thirty local units of government, including Mackinac Island and Bois Blanc, and six Native American tribes have recognized the magnitude of this threat, and have accordingly passed resolutions demanding the State of Michigan protect the public interest and restrict the flow of oil in Line 5 to prevent a catastrophic oil spill in the Great Lakes (see Appendix 5). Based on all of this information, the State of Michigan and you as its duly elected public officials have an affirmative legal duty to take immediate action. Such action is needed to address the unacceptably high risk of a catastrophic oil spill in the Great Lakes that would devastate our public drinking waters, our economy, and our Pure Michigan way of life.

State officials have advised that the State will not complete its risk or alternative assessments for the Michigan Pipeline Safety Advisory Board to review until June 2017. Given Enbridge’s significant easement violations and public trust obligations, we, the undersigned, believe that it is imprudent for the State of Michigan to wait over a year until the final risk and alternatives reports are slated for completion. Therefore, we urge the State of Michigan to immediately notify Enbridge in writing that the State is terminating the 1953 Easement (per Section C) on the basis of these multiple breaches of the terms and conditions of the easement and consistent with your legal trustee responsibilities to the citizens of Michigan.

Anne Zukowski, Board Member, Friends of the Jordan River