Last year Michigan Attorney General Bill Schuette and Dan Wyant, director of the Michigan Department of Environmental Quality, announced they would convene a multi-agency task force to address petroleum pipelines in Michigan, with a specific focus on Line 5. Line 5, in case you missed it, is the 62-year-old oil pipeline running under the Straits of Mackinac.

“If you came to hear me call for the lines to be shut down, you’re going to be disappointed, because I’m only going to talk about where the oil would go if there’s a break.” - David Schwab PhD, Research Scientist, University of Michigan Graham Sustainability Institute

The Task Force released its report in July, and to review the recommendations and learn more about the condition of the lines, the Mackinac Island Community Foundation sponsored a meeting at community hall, featuring a panel followed by public comment.

Over a hundred people, representing a cross-section of city and state park leaders and island residents, attended the meeting, despite competition from a postcard-perfect Mackinac day. 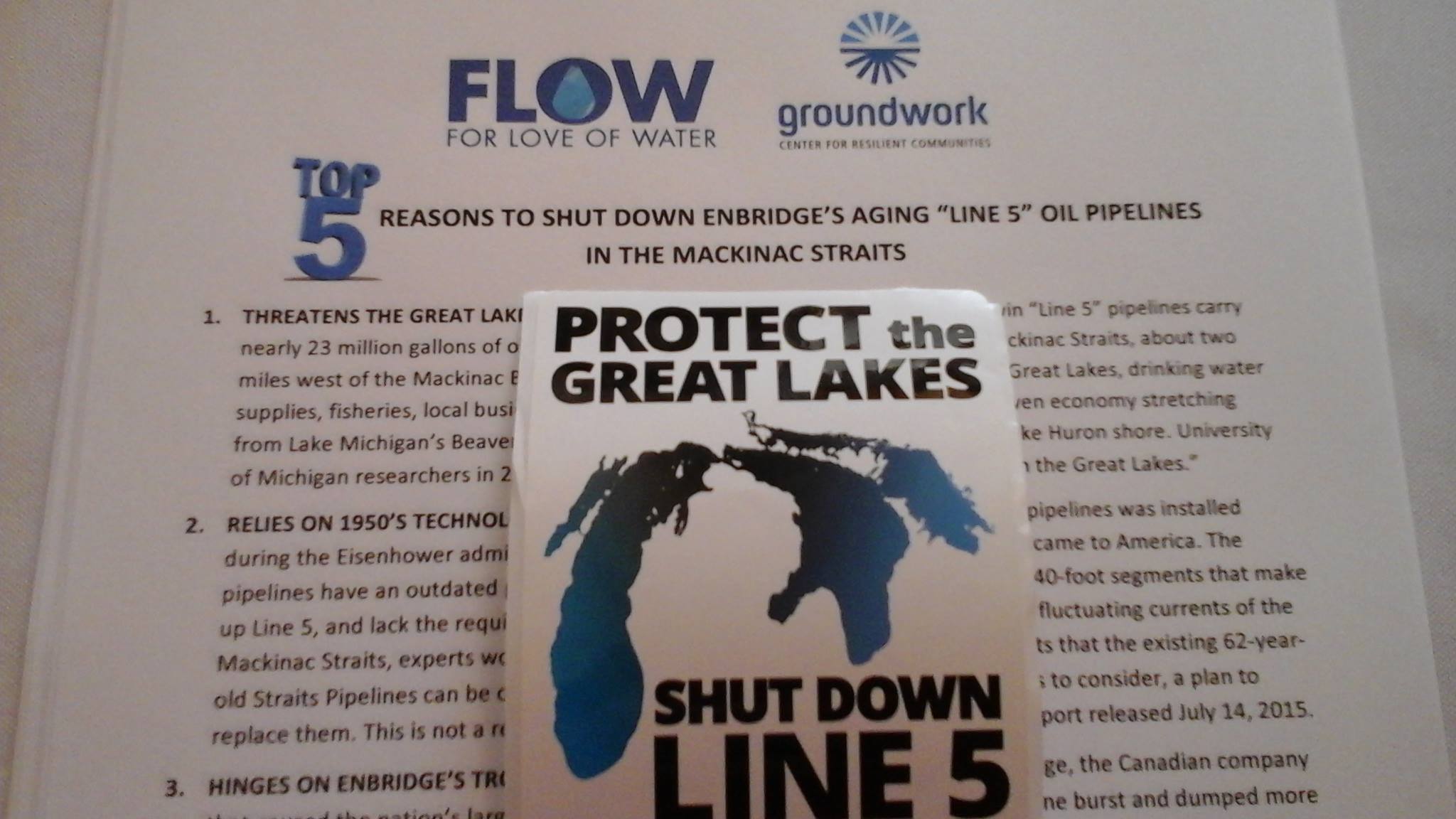 The first presenter was Dr. Dave Schwab, a world-renowned expert on hydrodynamic modeling of the Great Lakes and other coastal regions, (currents!!) and the creator of the highly-regarded computerized models of oil dispersion in the Straits that were released last year.

“If you came to hear me call for the lines to be shut down, you’re going to be disappointed,” he said when he started, “because I’m only going to talk about where the oil would go if there’s a break.”

He gave a brief review of the geology of the lakes, and noted the swift currents in the Straits and their unusual feature of running in both directions. The amount of water moving through the Straits is more than 10 times the flow of Niagara Falls, he said, only instead of going in one direction, it moves randomly back and forth. “I can’t imagine a worse place for an oil pipeline to be,” he said at the conclusion of his remarks.

He was followed by retired Dow Chemical engineer, Gary Street, who gave an assessment of the technical factors making the lines a risk, including their age, but also the wear and tear on the original protective (and carcinogenic) coating, the corrosion both inside and outside the lines, (540,000 barrels of oil products pass through the line daily. It is a hot, often gritty substance) the effects of currents buffeting the lines, and most recently, the added weight of millions of zebra mussels, obviously not a factor when the lines were put down in 1953. Not only do they add weight to the line, their secretions are extremely corrosive. If there is any small fissure in the line, according to Mr. Street, those secretions will get in and weaken it further. 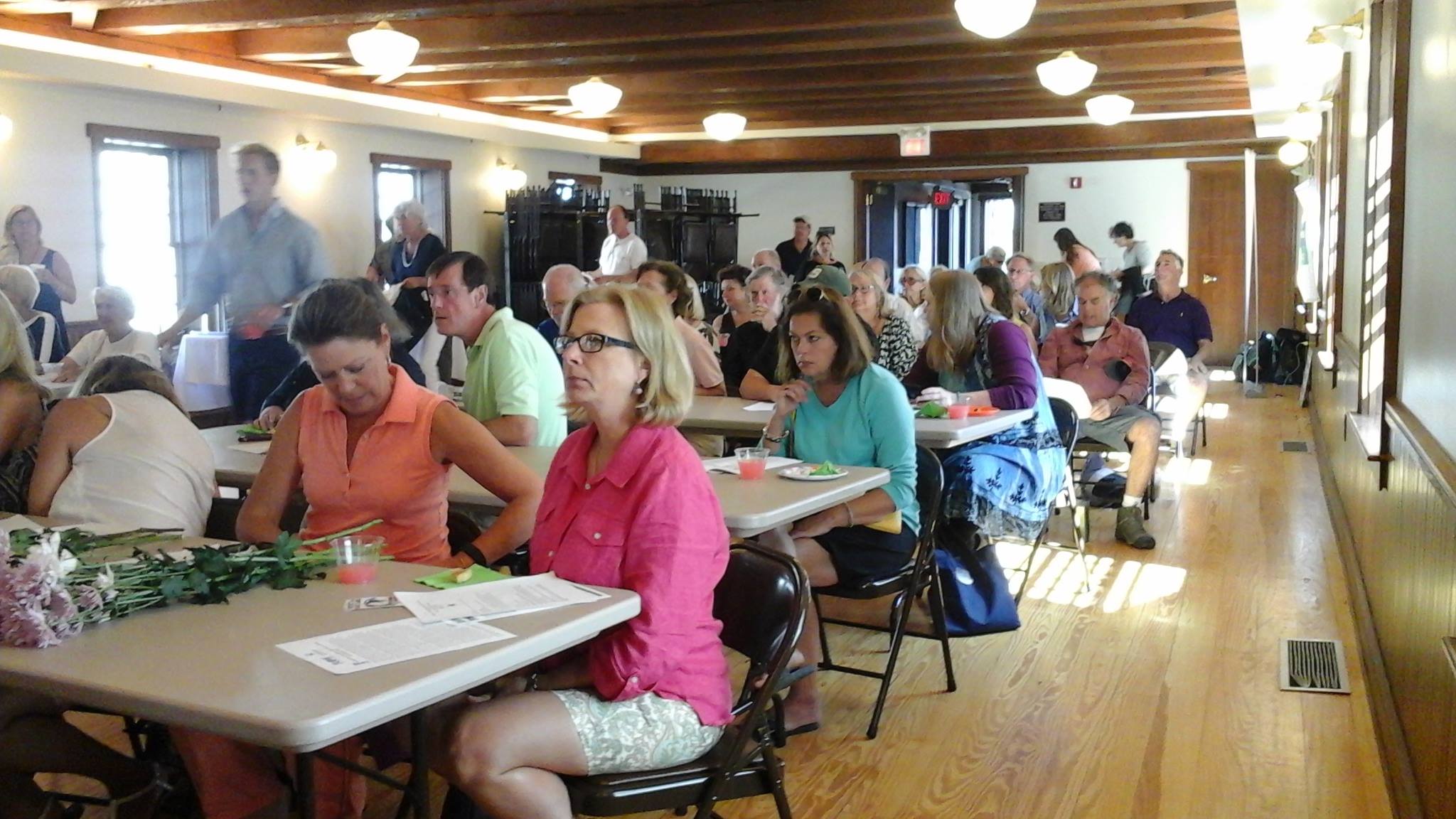 Liz Kirkwood, executive director of FLOW, (an organization using research and legal principles to protect the Great Lakes) followed with a review of the Task Force Report’s recommendations which are relevant to Line 5.

Most of the recommendations have already been covered on MINV, but Ms. Kirkwood focused on two of them.

1)  The Task Force called for Enbridge to provide adequate insurance to cover the cost of a clean-up. They currently carry only $1million in coverage, the amount set in 1953! The Kalamazoo clean-up has cost over $1 billion and isn’t done yet. For reasons cited earlier, a clean up in the Straits would likely be far more costly than the clean-up in Kalamzoo. 1953 insurance rates are not sufficient.

2)  The Task Force called for an independent risk analysis to be conducted on the condition and the safety of the lines.
The missing part of that recommendation, Ms. Kirkwood said, is a timeline. It is a script with no players, with no director, no opening night. Our job, she said, is to make sure that this report isn’t left in a drawer and forgotten.

Jim Olson, founder of FLOW and renowned champion of the Great Lakes, reiterated what Ms. Kirkwood said, adding that the state has authority over these lines, not the federal government, and that we must continue to call on our state leaders to protect our water.

He also noted that under the easement granted to them by the state of Michigan in 1953, Enbridge must release information on the lines when it is requested. The Report noted several times that Enbridge had failed to provide the information that the Task Force had requested.

"The missing part of that [Task Force] recommendation is a timeline. It is a script with no players, with no director, no opening night." - Liz Kirkwood, Executive Director, FLOW - For Love Of Water

Mr. Olson said the easement also states that if the line is likely to be an impairment to the surrounding area – as a spill would be -- then Enbridge is required to find another route. Enbridge is in violation of many of the conditions of the easement, he said.
Olson and others also noted that the oil in these lines has no bearing on the fuel supply for this region. Basically, oil coming from Canada (entering at Superior, WI) and going to Canada (a refinery in Sarnia) is being given a short cut through our Great Lakes! This is a huge risk to us, with no benefit.

Last on the program was Jim Lively, of Groundwork Center for Community Resilience (formerly Michigan Land Use Institute), which has coupled with FLOW, and other groups, to create the Oil and Water Don’t Mix campaign. (Think of FLOW as the back of the house, cooking up research and legal analysis, and Groundwork as the front of the house, serving that information to the public.) 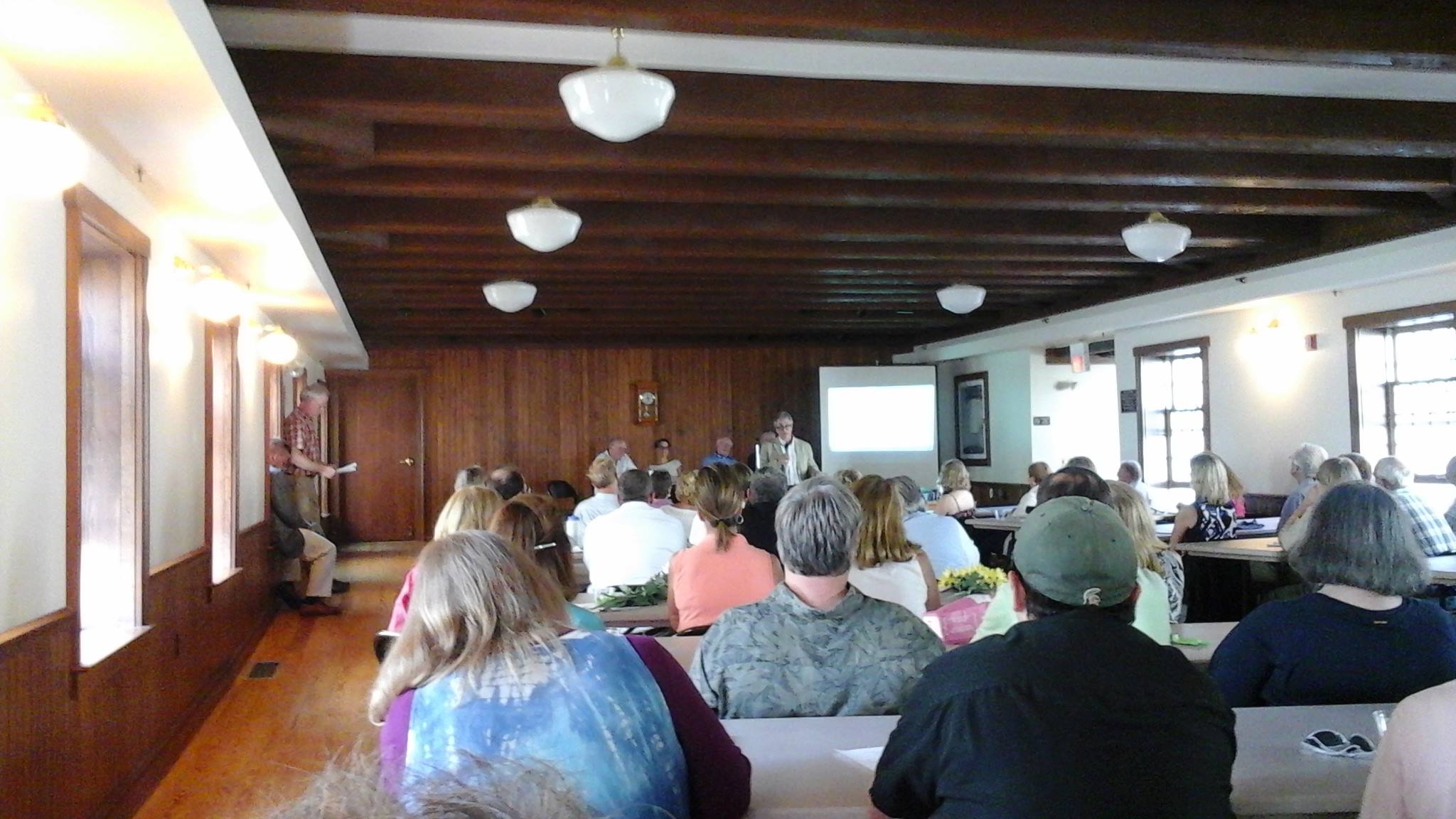 His brief message was simply that keeping the Straits safe and clean is not a partisan issue – but it is a political issue. Meaning, we need to call on our elected officials to make sure this report is read and understood by those in power, and more importantly, acted on. All speakers commended the work of the Task Force, but said it’s a call to action, not a solution to the problem. “540,000 barrels of oil still passes through the Straits every day. (A barrel = 42 US gallons) We are no safer today than we were before the report came out.”

The public comment segment of the meeting began with a statement read by Carol Rearick, on behalf of the CEO of Star Line Ferry, citing the risks of the oil lines to the economy and to the environment as being too high to be allowed to go on.
Susan Lenfestey commented that many people tell her that the line is inspected and that Enbridge has built-in safety valves, so no need to worry. But a line broke in Alberta, Canada on July 15 of this year, larger than the spill in Kalamazoo, but received little media attention due to its remote location. She said that Nexen, the company responsible, “said that its ‘fail safe’ spill-detection system didn’t work.” The company says it still does not know what caused the 20-inch pipeline to leak such an enormous volume.

*Nexen has now said that the line appears to have been leaking for two weeks before it was discovered.

“540,000 barrels of oil still passes through the Straits every day. (A barrel = 42 US gallons) We are no safer today than we were before the report came out.” - Jim Lively, Program Director, Groundwork Center for Resilient Communities

Jerry Fenlon, who lives next to the pipeline, five miles before it goes into the Straits, said that he has seen at least 5 repairs or preventive sleevings being put on that portion of the pipeline. He asked if Enbridge has a way to sense a problem on the underwater portion of the pipeline, and if so, have they made similar patches. Engineer Street and the panel agreed that if patches are being made on the line where you can see it then you can assume that there's a need for similar repairs underwater. Are those repairs being made? We assume so, but don't know.

Others in the audience questioned the panel about the flow rates of the Straits, technical details about the condition of lines and asked what alternatives there are if Line 5 is shut down. Discussion ensued. In response to the last questions, the panel noted that there are alternatives and that Line 6B has already expanded its capacity. There is currently a glut of oil, said Gary Street, making the oil of Line 5 unnecessary. Jim Olson also noted that decommissioning Line 5 would have no effect on the delivery of propane to the UP, as some have stated.

At a previous meeting about the pipeline last September, Bob Wagner, head of the DEQ’s remediation department, caught everyone’s attention when he stated that in the event of a spill, the ferries would be shut down immediately (and indefinitely) as would the water plant.

Yesterday, audience member Allen Burt, Mackinac Island resident and manager of the water plant, was asked how long it would be before drinking water would be restored to the island if there were a spill. He responded that the plant would have to shut down, all equipment would have to be taken apart and cleaned, and the membranes used for water purification would have to replaced. “Those membranes are not exactly sitting on the shelf, they come from Australia.” He estimated that the water plant would be out of commission for about 6 weeks. He said there’s a reserve of water that would last for probably a few days in the summer, much longer in the winter.

Which gets to the question of, what happens if Line 5 breaks in the winter? No one knows. Good news – a longer supply of drinking water. Bad news -- clean up under the ice has never been tried.

The meeting adjourned -- almost on time.