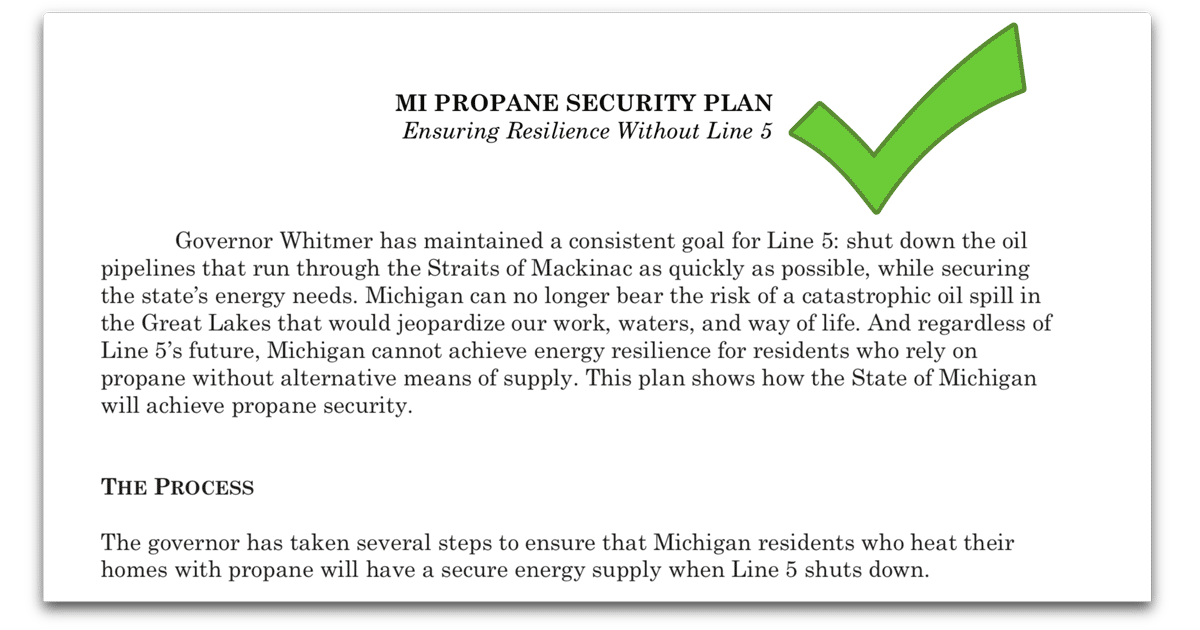 “The administration’s plan protects the health and safety of Michiganders by moving us away from the ticking time bomb of an old, damaged, dangerous oil pipeline in the Straits of Mackinac and embracing concrete actions to secure the state’s propane supply and protect energy consumers,” said Liz Kirkwood, Executive Director, For Love of Water (FLOW). “Michigan’s energy needs can be met without Line 5, and we can’t afford another Enbridge disaster like the Kalamazoo River oil spill.”

The Michigan Propane Security Plan that was announced today involves the Michigan Public Service Commission, the Michigan Department of Environment, Great Lakes and Energy, the Michigan Department of Transportation, and the Department of Technology, Management and Budget. The plan protects propane customers from price gouging; sends clear signals to encourage market participants to invest in alternative sourcing options; ramps-up state investment in rail and propane storage infrastructure; increases state monitoring of the propane industry and coordinates the response to potential disruptions; and sets a long-term path to lower energy costs through investments in renewable energy, energy efficiency, and electrification.

Enbridge’s massive fear campaign wants to scare us away from shutting down Line 5. But the reality is the only thing we have to fear is a foreign oil company’s nearly 70-year-old pipeline that is decades beyond being able to operate safely.” - Sean McBrearty, Oil & Water Don’t Mix campaign coordinator

“We have studied propane supply, and building up storage capacity is a key action to avoiding any disruption in energy supply in the Upper Peninsula when Line 5 is shut down in the Straits of Mackinac,” said Rosemary Grier of the Upper Peninsula Propane Research Team. “This is a good plan, very doable, and would take us on a path toward the kind of energy security we need here in the U.P.”

About 18 percent of Upper Peninsula households use propane for heating, with 35-50% of the propane supply coming from LIne 5. Only 0.25% of the volume flowing through Line 5 stays in the Upper Peninsula as propane.

“Enbridge’s massive fear campaign wants to scare us away from shutting down Line 5,” said Sean McBrearty, Oil & Water Don’t Mix campaign coordinator. “But the reality is the only thing we have to fear is a foreign oil company’s nearly 70-year-old pipeline that is decades beyond being able to operate safely.”