On behalf of its 20,000 active supporters, including local communities, tribal organizations, citizens groups and businesses, Oil & Water Don’t Mix thanks U.S. Sen. Gary Peters for leading a field hearing Monday in Traverse City of the Senate Commerce, Science and Transportation Committee on the threat of Enbridge’s Line 5 to Michigan’s environment and economy.

The hearing focuses on whether Enbridge, the Coast Guard, and other federal agencies are prepared for a catastrophic oil spill in the Mackinac Straits if Line 5 ruptures. We already know the answer to that question: the only plan that guarantees Michigan and the Great Lakes will be protected from a worst-case Line 5 oil spill is the one that decommissions Line 5, stops the flow of oil through the Mackinac Straits and removes the threat. Any other plan is just oil under the bridge and up to $6.2 billion in damages to our Great Lakes coastline, economy and way of life. 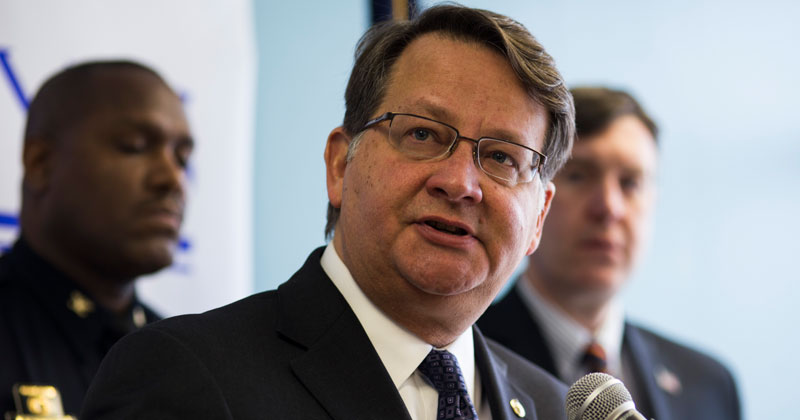 On Monday Sen. Peters, committee staff and the public will be asked to take Enbridge’s word on Line 5 safety and to believe what federal regulators responsible for pipeline oversight have to say. Perhaps if the federal Pipeline Hazardous Safety Administration had adequate pipeline inspections and didn’t view its mission as primarily supporting the fossil fuel industry they would be a credible voice in the room. But the truth is that there is little accountability and fragmented, ineffective state and federal oversight when it comes to Line 5 and oil pipelines in general. In virtually every case the governmental response to Line 5—at both the state and federal levels—is to rely on Enbridge. In 2010 that had disastrous consequences for Michigan when Enbridge’s Line 6B spilled 1.2 million gallons of oil near Marshall.

For years, Enbridge has assured us that Line 5 is safe and not to worry about an oil spill. By now we all know that to be untrue. Enbridge lied about Line 5 safety when it knew that since 2003 numerous bottom support anchors were missing and failed to disclose it until 2017, nine months after a report documented that pipeline spans of up to 286 feet had no anchor support. How unsafe was Line 5? According to retired Dow engineer Ed Timm, from 1953 through 2003 the pipeline was “one peak current event” away from failure. Then in 2017, Enbridge claimed that missing protective coatings along the Straits pipeline were a mere “hypothetical” possibility, while at the same time a video in their possession showed areas of missing coatings.

After 29 oil spills along its 645-mile route from Superior, WI, through Michigan, false claims about its condition and an overall track record in Michigan that includes $177 million in civil penalties, $1.3 billion in damages and more than 2.3 million gallons of spilled oil, Enbridge’s soothing words about Line 5 can’t be trusted.

"For years, Enbridge has assured us that Line 5 is safe and not to worry about an oil spill. By now we all know that to be untrue." - David Holtz, Oil & Water Don't Mix campaign

As recently as this past April, Enbridge’s claims about Line 5 pipeline safety were put to the test when an anchor was deployed in the Mackinac Straits, denting Line 5. Was there an immediate response and damage assessment triggered by an acoustical warning device that sent first responders into action? No. It was three weeks before underwater vehicles could safely navigate the turbulent Straits to put eyes on the damage. Unsafe conditions are a fact of life in the Mackinac Straits. It’s what can cause a ship to deploy an anchor in an emergency and it’s what can prevent anything like a rapid response to a pipeline rupture. The Mackinac Straits—the Great Lakes—is no place for dangerous oil pipelines. Yet while other reliable alternatives exist, Michigan’s governor and attorney general can only come up with a solution that leaves Line 5 in the Mackinac Straits and the Great Lakes and Michigan in danger.

The testimony Senator Peters and everyone should most focus on Monday is not what Enbridge says or any bland, dispassionate assurances from government officials, but what our eyes see and our minds know: every day Line 5 is in the Mackinac Straits is a day when Michigan’s future can be drowned in a sea of oil. The only safe and reliable response to Line 5 is to shut it down.