ANN ABOR, MI — The National Wildlife Federation (NWF) today sued the federal agency largely responsible for overseeing oil pipeline safety, asserting the agency illegally authorized the transport of oil through a pipeline that runs through Michigan’s Upper Peninsula, under the Great Lakes at the Straits of Mackinac, and through the state’s Lower Peninsula.

The NWF is effectively asking the court to stop the transport of oil through the pipeline—known as Line 5—until the federal Pipeline and Hazardous Materials Safety Administration complies with federal law. 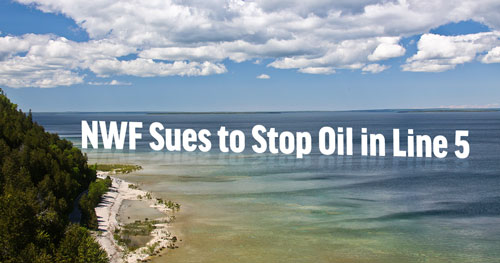 “We are taking action today to protect people, communities, wildlife, and the Great Lakes from a potential oil disaster,” said Mike Shriberg, the National Wildlife Federation’s Great Lakes regional executive director. “Michigan is home to the largest inland oil disaster in U.S. history, and we need to make sure that we never experience that again. The federal government needs to do its job in protecting the Great Lakes; that has not happened to date and, therefore, Line 5 should not be allowed to operate.”

The National Wildlife Federation filed the lawsuit today in the United States District Court for the Eastern District of Michigan in Detroit. Read the lawsuit here.

The National Wildlife Federation’s lawsuit follows a concerted effort by Great Lakes advocates, Attorney General Bill Schuette and Michigan Gov. Rick Snyder to force pipeline operator Enbridge Energy to come clean about the integrity of the 63-year-old Line 5 pipeline, which pumps up to 23 million gallons of oil per day under the Straits of Mackinac.

"The federal government needs to do its job in protecting the Great Lakes; that has not happened to date and, therefore, Line 5 should not be allowed to operate.” - Mike Shriberg, National Wildlife Federation’s Great Lakes regional executive director

Enbridge Energy’s 2010 oil spill near Kalamazoo, Mich.—the largest inland oil spill in U.S. history—spilled more than 800,000 gallons of oil and contaminated more than 37 miles of the Kalamazoo River at a cleanup cost of more than $1 billion. University of Michigan researchers warned in a March report that more than 700 miles of Great Lakes shoreline and more than 17,000 square miles of open water are potentially at risk from oil spills in the Straits of Mackinac from Line 5.

According to NWF’s lawsuit, PHMSA failed to assess impacts on the environment, including shorelines, beaches, fish, and wildlife as required under the National Environmental Policy Act, as well as failed to assess impacts on endangered or threatened wildlife and plants as required under the Endangered Species Act during its 2013 approval of Enbridge’s emergency spill response plan. The lawsuit also asserts that PHMSA illegally approved plans for offshore portions of the Great Lakes pipeline—a power that resides outside the agency’s authority.

NWF is asking the court to set aside the agency’s approval of the spill response plans for the portions of the pipeline under the Straits of Mackinac and other navigable waters in the state’s Upper and Lower Peninsulas. The National Wildlife Federation is also asking the court to order the agency to comply with the National Environmental Policy Act and the Endangered Species Act.