A new local Straits of Mackinac citizens group led by retired science, governmental, and legal experts is challenging the state’s decision to allow Enbridge Energy to install anchors the group believes will increase the threat of an oil rupture from the battered, aging Line 5 pipelines.

The Cheboygan-based Straits of Mackinac Alliance says its formal petition filed with the state Monday challenging a state permit for 22 new Line 5 anchors was prompted by the failure of state officials to enforce Michigan’s environmental laws and the conditions of an agreement with Enbridge to operate Line 5. 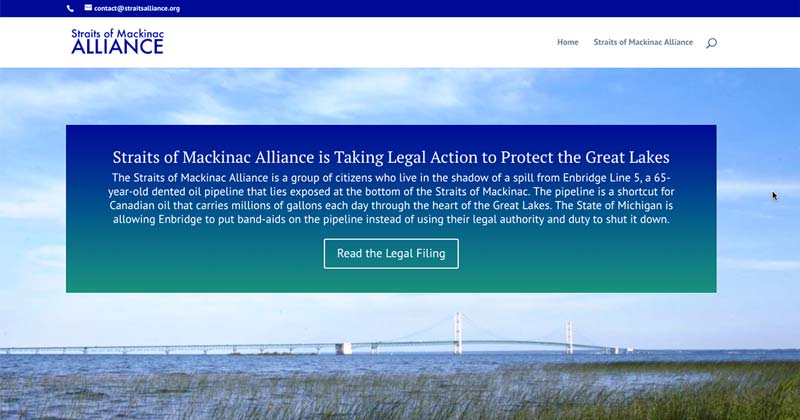 “We are committed to aggressively requiring Enbridge and the state to follow our laws meant to protect the Great Lakes from a Line 5 oil spill that would be catastrophic for Michigan and for those of us who live in the pipeline's shadow,” said Leonard Page, a retired UAW lawyer living in Cheboygan. “Our decision to form a nonprofit did not come easy, but it’s clear that the governor and attorney general are not going to enforce the law, do their jobs, and protect the Great Lakes and our homes from Enbridge’s risky pipelines.

“It’s too bad average citizens are forced to be the cop on the environmental beat, but we are committed to taking whatever legal means are necessary to shut down Line 5 because that’s the only way we can protect the Great Lakes from an oil spill.”

The permit brings the total to150 anchors that support almost two miles of Line 5 pipelines suspended off the bottom and replaces the original engineering design of the pipes. In its appeal of the permit, the Alliance says Enbridge and state officials passed off the additional anchors as a repair, when in reality they will completely alter the pipeline design, increasing the threat of an oil rupture from the battered, aging Line 5 pipelines.

Roger Gauthier, a retired U.S. Army Corps of Engineer senior staff, and Gary Street, a retired Dow Chemical engineering manager, joined Page in forming the Straits of Mackinac Alliance, along with a number of property owners along the lakeshore of the Straits. Traverse City attorney Ross Hammersley of the firm Olson, Bzdok & Howard is representing the Alliance and filed the permit appeal, which will be heard by an administrative law judge.

“It’s too bad average citizens are forced to be the cop on the environmental beat, but we are committed to taking whatever legal means are necessary to shut down Line 5 because that’s the only way we can protect the Great Lakes from an oil spill.” - Leonard Page, Straits of Mackinac Alliance

In challenging the March 22 permit approval by the Michigan Department of Environmental Quality, the Alliance says the state ignored pipeline damage caused by previous anchor installations, failed to analyze the risks associated with the anchors and the aging pipeline, as well as Enbridge’s violations of its easement agreement for operating Line 5. The Alliance also believes the state has failed to determine whether allowing anchors to suspend the pipeline above the lakebed make the pipeline more likely to be struck again by a ship’s anchor, possibly increasing the chances of a ruptured pipeline. A barge dropped an anchor in the Straits last month, damaging Line 5 and raising concerns across the state about a potential pipeline rupture.

“Anchoring the pipeline to an unstable bottom is a recipe for disaster,” said Gauthier. “The bottom of the Straits of Mackinac is eroding quicker than anyone expected. Adding more anchor supports does not make the line more secure.”

Enbridge is operating the 65-year-old pipeline beyond its expected life and should have been required by the state to prove it could operate safely before any permits were issued, the group said. Moreover, Enbridge has been unlawfully allowed by the state to expand Line 5’s operations through piecemeal approval of permits under the guise of “maintenance” in violation of the state’s Great Lakes Submerged Lands Act. What the Canadian transport giant is really doing is establishing a whole new pipeline design at the heart of the Great Lakes without sufficient environmental reviews, the Alliance said.

“Enbridge’s negligence caused the largest inland oil spill in Michigan and US history and should have been a wakeup call for state officials to up their game,” said Street, citing the 2010 Marshall, MI Enbridge pipeline rupture that spilled more than a million gallons of oil. “Since then, the State has bent-over backward to give Enbridge everything it has asked for and has bent or ignored our state’s environmental laws to do so. “

“These brave citizens are standing up to say that the state needs to follow and enforce the law,” said Hammersley.

A copy of the group’s appeal, and a way to donate to this cause is available on their website.