Concerned citizens and stakeholders gathered at the Straits of Mackinac today to call to shut down Line 5 before ice covers the Straits this winter. 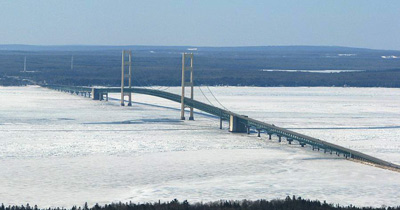 St. Ignace, MI - Today Food & Water Watch united with allies and concerned citizens near the Straits of Mackinac to call attention to Enbridge’s shaky safety record and called on Governor Rick Snyder and Attorney General Bill Schuette to shut down Line 5 before the winter ice appears. The event took place while Enbridge conducted an oil spill response drill in the Straits of Mackinac.

Line 5 is a 62-year-old oil and gas pipeline owned by Enbridge that runs under the Straits of Mackinac. According to a University of Michigan study, the Straits are the “worst possible place” in the Great Lakes for a spill. Enbridge’s own experts have indicated that if a leak in Line 5 were to occur, and be shut down after just five minutes, over 200,000 gallons of oil (twice the amount recently spilled in Santa Barbara) would be released into the Great Lakes.

"Planning a response to an inevitable spill is misguided; the only way to protect the Great Lakes — which holds 20 percent of the world’s fresh drinking water — is to prevent a spill from happening in the first place. To do that we must shut down Line 5.” - Lynna Kaucheck, Food & Water Watch

“Enbridge’s track record speaks for itself,” said Lynna Kaucheck of Food & Water Watch. “Their safety record is questionable at best, and we cannot trust them to safely operate a pipeline under the Straits. In fact, planning a response to an inevitable spill is misguided; the only way to protect the Great Lakes — which holds 20 percent of the world’s fresh drinking water — is to prevent a spill from happening in the first place. To do that we must shut down Line 5.”

Certainly the most memorable spill to Michiganders is when Enbridge’s Line 6b ruptured in the Talmadge Creek near Kalamazoo in 2010, spilling roughly one million gallons of tar sands crude and contaminating 38 miles of river. For this monumental spill Enbridge deployed an initial response crew of only four maintenance employees and took 17 hours to respond. The clean up for the Line 6b spill cost roughly $1 billion dollars, and was five times more costly than any previous inland pipeline accident.

“People and communities near Kalamazoo are still recovering from Enbridge’s catastrophic spill,” continued Kaucheck. “While Enbridge is hosting a barbecue for community members in St. Ignace today, it is important to remember that there is no such thing as a free lunch. Community members in Kalamazoo continue to pay the price of Enbridge’s negligence.”

In April of this year, the U.S. Coast Guard Commandant testified before Congress and indicated that he is “not comfortable” with the current contingency plan for a worst-case scenario spill in the Great Lakes. As a matter of fact, the Straits are at the top of the Coast Guard’s list for high-risk oil recovery sites in the region. If a release were to occur in the winter when the Straits are covered with ice, clean up efforts would be drastically complicated and arguably impossible.

"The pipelines at the Straits must be decommissioned. The consequences of a failure are just too great, the devastation immense and irreversible." - Aaron Payment, Chairperson of Sault Ste. Marie Tribe of Chippewa Indians

Michigan is a cut through for Canadian oil; the crude oil being shipped through Line 5 originates in Canada and ends up in Canada. According to a recent report from FLOW, the oil running through the Straits poses an “imminent” risk, and a D.C. Circuit Court has ruled that “the government, when faced with uncertainty of devastating or serious harm does not have to wait for a catastrophe or harm to occur, but can act to prevent it.”

"The pipelines at the Straits must be decommissioned. The consequences of a failure are just too great, the devastation immense and irreversible," said Aaron Payment of the Sault Ste. Marie Tribe of Chippewa Indians Chairperson. "For four to six months of the year, the Straits are ice-covered, making adequate spill response impossible. The waters that would be impacted by a spill in the Straits include the shoaling, spawning and nursery areas for critical fish species in Northern Lake Michigan and Huron. Further, a catastrophic oil spill in the Straits would shut down water intakes for numerous communities, devastate our shorelines and island ecosystems, and lay waste to our fishing and tourism industries."

"It’s long past time that our state lawmakers start acting in a precautionary, rather than reactionary way when it comes to the Lakes. It’s time to shut down Line 5!” - Phil Parr of Lake Charlevoix Brewing Company

A recent article from the Laborers International Union of North America touted that Enbridge employs roughly 250 full-time employees in Michigan, but according to Michigan State University Extension one out of every fived jobs in Michigan is linked to the high quality and quantity of fresh water in the Great Lakes. Michigan’s booming tourism industry and local businesses like the 130 Michigan businesses that recently joined Food & Water Watch and others in calling on Governor Snyder and Attorney General Schuette to shut down Line 5 depend on the heath of the Great Lakes.

“Our communities, economy and environment are deeply connected to the health of the Great Lakes,” said Phil Parr of Lake Charlevoix Brewing Company. “Our Great Lakes and the lives they support are more important than money. It’s long past time that our state lawmakers start acting in a precautionary, rather than reactionary way when it comes to the Lakes. It’s time to shut down Line 5!”