As Gov. Rick Snyder joins thousands of Michiganders in the annual Labor Day walk across the Mackinac Bridge, citizens from across the state will urge the governor to take immediate action to protect the Great Lakes from a disastrous oil spill waiting to happen. 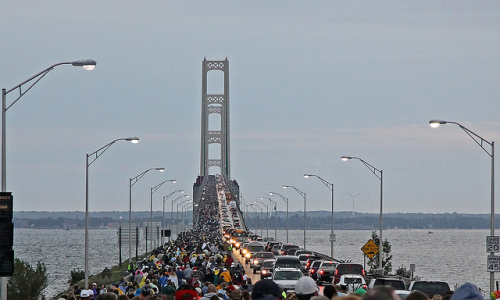 Even older than the 57-year-old Bridge Walk tradition is a pair of underwater oil pipelines that carry nearly 23 million gallons of oil through the Straits of Mackinac every day. The pipelines are owned by Enbridge, the Canadian company responsible for the 2010 Kalamazoo River oil spill - the largest inland spill in U.S. history. Enbridge pipelines had more than 1,000 spills in the United States and Canada between 1999 and 2013. Research by the University of Michigan has shown that an oil spill would prove catastrophic in the strong, erratic currents of the Straits.

Join Oil & Water Don't Mix at the Bridge Walk! Get all the details and RSVP here.

Oil & Water Don't Mix campaign members will seek signatures from Bridge Walk participants on a citizen petition urging the governor to immediately open a public process to evaluate the threat posed by the pipelines and determine what actions should be taken to protect the Great Lakes from a catastrophic oil spill.

Representatives of the Oil & Water Don't Mix campaign include:

Find out more about this event from The Detroit News