It was revealed today that Enbridge Line 5 was also damaged by the same incident that sent 600 gallons of toxic fluid spilling into the Great Lakes last week. Oil & Water Don't Mix issued this response. 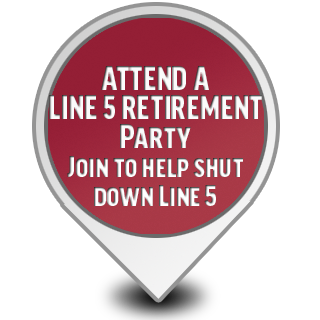 Sean McBrearty, coordinator for the Oil & Water Don't Mix campaign said, "Enbridge has just disclosed dents in the dual pipelines caused by the same vessel that hit two electric cables and spilled 600 gallons of hazardous oils into the Straits last week. There is no question -- the time has come to shut down Line 5.”

“Pipelines do not belong in the Straits of Mackinac, period. Our state’s economy, tourism, and way of life revolves around keeping our Great Lakes in a pristine condition. There’s simply too much at stake to keep Line 5 in operation.”

“This lame duck Governor’s immediate response to allow a new tunneled oil pipeline under the Straits proves what Michiganders have suspected for a long time - this Governor puts a Canadian oil company’s interests before the people of Michigan or the Great Lakes.” - Sean McBrearty, Oil & Water Don't Mix

“Rebuilding the pipeline would lock our state into decades more of transporting dirty, dangerous Canadian oil, putting our state and the Great Lakes and other Michigan waterways at grave risk while providing very little benefit to Michigan.”