It is shocking and unacceptable that in the face of a state-sponsored report released today indicating Michigan would take a $2 billion hit from an Enbridge Line 5 oil spill that would devastate the Great Lakes, put more than 2,000 toxic chemicals into the air, water, and land, and impact Lake Michigan beaches as far west as Wisconsin, the Snyder administration continues defending Line 5 by insisting it must remain operating for decades to come in the Mackinac Straits. 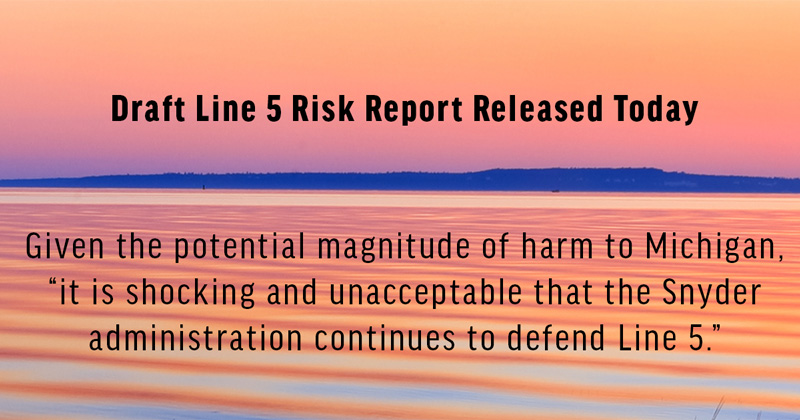 In a news release today, Department of Natural Resources Director and Pipeline Safety Advisory Board co-chair Keith Creagh indicates there’s some form of Line 5 in the Mackinac Straits that is acceptable. Oil & Water Don’t Mix, and thousands of residents, businesses, groups, tribes, and communities vehemently disagree. There is no acceptable loss from an oil pipeline that Michigan doesn’t need. Today’s risk analysis report low-balls the economic impact of a catastrophic Line 5 spill, which independent groups have estimated would likely exceed $6 billion. The report doesn’t even attempt to measure what the impact would be of a Line 5 rupture in other parts of Michigan where more than 400 waterways are potentially under threat.

What Michigan’s current governor and attorney general are doing is trying to convince Michigan residents that there’s an acceptable risk when the fact is the risks are just too great and the rewards for Michigan nearly non-existent to continue operating this dangerous oil pipeline in the Great Lakes. We can only hope that Michigan’s next governor and attorney general prioritize the Great Lakes and Michigan over oil industry profits and Canada.