Snyder Oil Tunnel a Shocking Abandonment of the Great Lakes

Today, Governor Snyder announced a deal to build a tunnel through the Straits of Mackinac to house the Enbridge Line 5 oil pipeline.

While Enbridge and other special interests champion his backroom deal, the people of Michigan won’t be fooled by clever public relations backed by oil industry money. If Gov. Snyder’s real priority was the Great Lakes, he would have secured Enbridge’s 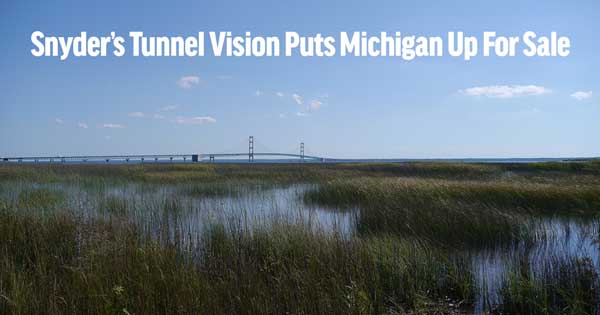 agreement to stop the flow of oil through the Straits during the 7-to-10 years it will take to build an oil tunnel. Instead, the governor wants to put the future of the Great Lakes and the Mackinac Bridge Authority firmly in Enbridge’s hands while bypassing Michigan’s environmental and public service laws. The fact that the governor is abusing the bridge authority’s public purpose for Enbridge’s private gain is itself a good reason to reject this tunnel for Canadian oil. But it is Gov. Snyder’s abandonment of his public trust obligation to protect the Great Lakes that is putting Michigan at greatest risk.

Independent investigations have documented how the state has allowed Enbridge to influence decisions on Line 5 and today’s announcement is the culmination of this corrupted process that was supposed to result in protecting the Great Lakes from Enbridge’s oil pipelines. Instead, we have a backroom deal that keeps them there and puts Michigan even more at risk.

We will vigorously oppose this selling off of the Great Lakes. Michigan voters on Nov. 6 and Michigan’s next governor should decide whether the future of the Great Lakes belongs to the people of Michigan or a Canadian oil transport giant.