Citizens groups leading the effort to decommission Line 5 have unequivocally rejected Governor Snyder’s deal with Enbridge announced on Monday on the grounds that it continues to fail to protect the Great Lakes from a catastrophic oil spill. 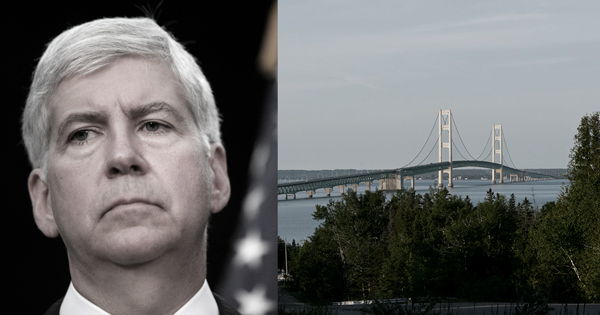 The agreement calls for Enbridge to shut down Line 5 during adverse weather, but narrowly defines adverse weather as sustained waves over 8 feet, with no consideration given to icy conditions on the Straits, or the fact that the Coast Guard can’t clean up a spill in waves greater than three feet according to the group. The agreement was reached between Governor Snyder and Enbridge, with no consultation from the Pipeline Safety Advisory Board, or any of the 12 federally recognized Native American tribes in Michigan, five of whom have tribal fishing rights in the Straits of Mackinac.

“In the last year alone, tens of thousands of Michigan residents have made their voices heard by submitting public comments and writing letters to Governor Snyder and Attorney General Schuette calling for Line 5 to be decommissioned,” said Sean McBrearty, Oil and Water Don’t Mix Campaign Coordinator. “The Snyder administration is again ignoring the voices of Michigan residents and putting our water at risk for a corporate polluter’s financial gain. How does this pass for transparency? He’s making a backroom deal with a company that has lied to the state time and time again, and he is inviting another major environmental catastrophe to occur on his watch.”

“A tunnel or a trench does nothing to eliminate that risk. The only way to protect the Great Lakes is to decommission Line 5 immediately and without replacement.” - Mike Ripley, environmental coordinator for CORA

“Having a pipeline pumping 23 million gallons of oil every day through the worst place in the Great Lakes for an oil spill is simply not worth the risk,” said Mike Ripley, environmental coordinator for CORA. “A tunnel or a trench does nothing to eliminate that risk. The only way to protect the Great Lakes is to decommission Line 5 immediately and without replacement.”

“Line 5 is not essential energy infrastructure for Michigan. With safer options available for meeting our energy needs, there is no reason for the state to consider tunneling or any other option that falls short of eliminating the risk to our water entirely,” said Liz Kirkwood, Executive Director of FLOW. “Enbridge has proven again and again that they can’t be trusted. It is time for Governor Snyder and Attorney General Schuette to fulfill their duty to protect the Great Lakes by enforcing the easement and decommissioning Line 5.”