The end is near for Enbridge's Line 5. Right? Read about how a decision Friday by "Big Gretch" Whitmer is reshaping the entire landscape in the Line 5 battle. Today's This Week Monday.

No, the fight isn’t over. But a major development Friday in the movement to shut down Enbridge’s old, dangerous oil pipeline in the Great Lakes was cause for celebration across Michigan’s two peninsulas and beyond.

Gov. Gretchen Whitmer’s legal action aimed directly and boldly at decommissioning Line 5 in the Straits of Mackinac was a big story---shared, commented, or linked to 76,551 times by people who read about it in 170 media outlets across the country. But as any football fan in Michigan will tell you, the promise of victory isn't the same as winning or a final score. Your must still defeat your opponent. Michigan's clear opponent now is Enbridge. 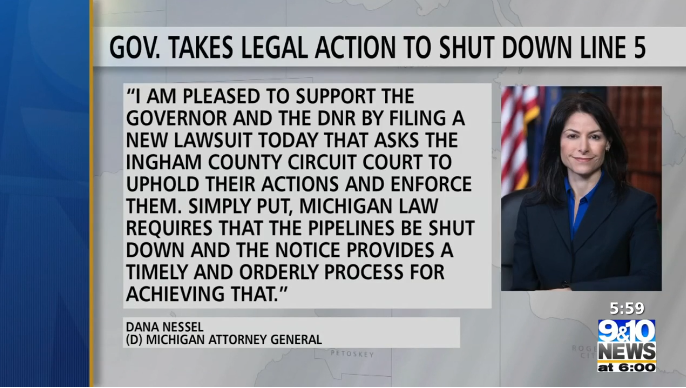 After an initially slow response Friday to Whitmer’s decision, Enbridge’s public relations department cranked out their familiar Line 5-is-safe message that Michigan’s governor thoroughly discredited with her notice of easement revocation that details Enbridge’s pattern and practice of misdeeds and history of failures that add up to violating their agreement in 1953 to exercise due care in operating Line 5.

The Canadian oil transport giant will surely put on a full legal defense.  But with "Big Gretch" Whitmer now quarterbacking the state's offense Michigan is in the Red Zone and the goal of protecting the Great Lakes from a Line 5 failure within sight.

What happens next will take place on several fronts. The first order of business may be in Ingham County Circuit Court where the state now has two lawsuits to decommission Line 5 before two different judges. That's likely to be resolved by combining them into a single case. Nessel’s initial case before Judge James Jamo, filed last June, awaits a decision from Judge Jamo on whether to grant Nessel’s motion for summary judgment, which would decide the case without a full trial. Enbridge countered with a request to dismiss the case.  No date has been set for a decision.

Whatever happens in Ingham court will likely be appealed by the losing side and Whitmer’s May 12 deadline for Line 5 decommissioning sets a new legal clock ticking that Enbridge may try to unwind.

How could Enbridge do that? Possibly by asking the Ingham court for an injunction to stop the clock until there’s a court decision there. That may be a long-shot move given the state’s strong legal case is rooted in a solid foundation of Enbridge easement violations and public trust doctrine that should give legal priority to protecting the Great Lakes.

Another potential option for Enbridge is to try and quickly enlist the outgoing Trump administration’s help in prying open a federal case to block the state from decommissioning Line 5. Given that federal law clearly gives states jurisdiction over pipeline location and that Michigan authority over Great Lakes bottomlands is also unquestioned a federal case might be an Enbridge Hail Mary pass at best.

So where does this leave Enbridge's Line 5 oil tunnel project? Enbridge will continue pursuing it, if for no other reason than to create the impression that they are here to stay. Whitmer’s legal action Friday doesn’t address the tunnel issue directly. Her administration went to great pains with Michigan’s environmental community to make it clear that decommissioning Line 5 and the Line 5 tunnel are separate issues.

But are they really unrelated? Environmental experts and lawyers say no. They point out it would be years before a tunnel could be built and Line 5 would have been out of operation virtually all of that time. That should be taken into account in any permit decisions for the tunnel. And within months of a May Line 5 shut down we should also see the scaffolding of fear Enbridge has erected around the alleged pain of losing Line 5 crumble and collapse under the weight of the reality that Michigan is doing just fine--much better, thank you--without Line 5.

For now, Michiganders will keep moving the ball forward with their governor and attorney general in the lead heading toward the day when Line 5 is no longer a threat.  And hope we get across the goal line before 700 miles of Great Lakes coastline flood the zone with millions of gallons of oil.