The state gets some help with Enbridge's proposed oil tunnel, the Michigan Public Service Commission moves ahead on Line 5 tunnel proposal review, and if it's Friday it's Law and Oil.  All in today's This Week Monday. Register to subscribe to This Week Monday here.

EGLE has Landed Tunnel Experts But Will It Matter?

The Michigan Department of Environment, Great Lakes, and Energy (EGLE) tried making a bit of a show out of hiring an outside engineering firm to review Enbridge’s Line 5 tunnel proposal when it announced last week the end of public comment on two Enbridge permit applications pending with the agency.

Is this good news?

The upside:  although EGLE’s press release announcing the hiring of the McMillen Jacobs Associates engineering firm was largely ignored by the state’s covid and election focused news media, credit where credit is due:  acknowledging you don’t have the in-house expertise to review Enbridge’s tunnel proposal is, on the surface, a good start. That’s especially true given devastating critiques (here and here and here) during the official comment period of Enbridge’s dangerously flawed tunnel proposal from a leading tunnel expert, a certified geologist, Oil & Water Don't Mix, and many others.

So shall we all relax now and let EGLE and its new engineering consultants sort it all out behind closed doors now that the public comment period is over?  Not by a long shot.

So let’s dig deeper into the tunnel situation, particularly in light of a ruling Friday giving the Michigan Public Service Commission (MPSC) an important role in evaluating the safety and public interest of Enbridge’s plan to bury an enclosed Line 5 pipeline in the Straits. The MPSC will also be using McMillen Jacobs Associates as engineering consultants.

Tunnel expert Brian O’Mara, in comments to EGLE on Enbridge’s tunnel plan, warned that EGLE’s lack of tunnel expertise could put the state and Great Lakes at huge risk. Has hiring McMillen Jacobs Associates changed that assessment? O’Mara says EGLE’s new consultants should understand the highly technical analysis he and others provided on the proposed permits and if they engage him and other technical experts directly it will be a confidence builder for him. An independent engineering consultant should have been involved much earlier with EGLE rather than being brought in at the 11th hour, but better late than never, said O’Mara. Current Enbridge design, extremely poor quality bedrock, the presence of methane in groundwater, and anticipated high groundwater inflows are incompatible with the assumptions in the risk assessment completed for the State of Michigan in 2017, said O’Mara.

Geologist Michael Wilczynski also hopes to talk with EGLE’s new consultants but is skeptical. After more than a decade with the agency, Wilczynski retired five years ago as a senior geologist with the Dept. of Environmental Quality, the predecessor to EGLE. He describes an agency whose watchdog mission was corrupted during the Snyder administration and worries things may have gotten worse as the agency culture that produced the poisoning of Flint became baked into the 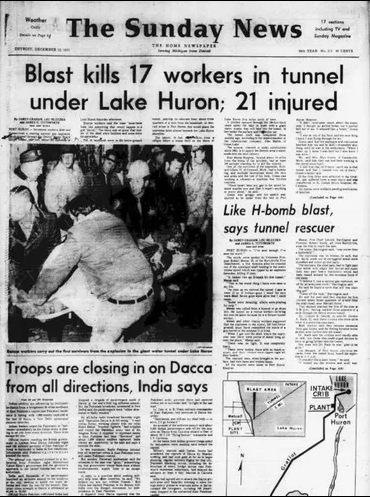 bureaucracy, particularly at the management level.   “Snyder killed the department by backing off on enforcement action and basically let industry do what they wanted,” Wilczynski explains.

So while there’s hope that eventually the Whitmer administration will demonstrate a willingness to challenge the EGLE bureaucratic status quo, even if that happens--a big if--it will likely be too late when it comes to Line 5 and the future of the Great Lakes unless…Whitmer’s EGLE Director, Liesel Clark, and her deputy, James Clift, keep a sharp eye on the permitting process and don’t adopt the stance that getting to yes on polluter permits is the default EGLE option.  Hiring an outside engineering firm to consult on Enbridge permits could be taken as a sign this is happening. Or it could simply provide cover for permit decisions the EGLE bureaucracy and leadership have already made.

One other possibility is that the MPSC--which coordinates with EGLE but operates independently--will step up and conduct a rigorous, thorough evaluation on whether a pipeline carrying 23 million gallons a day of hazardous liquids through a tunnel that Enbridge wants to build on the cheap is safe and in the public interest.  Remember Michigan has a history of Great Lakes tunnel collapses and tunnels carrying liquified natural gas in addition to oil--which is the case with Line 5--sometimes go boom and explode.  The fact is there are better alternatives to Line 5 for Michigan--options that don’t put the Great Lakes and state’s taxpayers at risk.

With the big news late Friday that MPSC administrative law judge Dennis Mack rejected Enbridge’s attempt to severely narrow the MPSC’s role in reviewing the proposed tunnel, the MPSC job in representing the public interest in helping determine the fate of Enbridge’s proposed oil tunnel is now clearer.  MPSC jurisdiction over oil and gas pipeline location was never in doubt and moving Line 5 underground in the Straits of Mackinac is clearly a proposal to relocate the pipeline.  Yet Enbridge insisted the MPSC’s role shouldn’t include evaluating the tunnel, only the pipeline. Judge Mack soundly smacked down that argument and agreed with MPSC commission staff, Michigan Attorney General Dana Nessel, tribes and environmental groups that whether the tunnel is in the public’s interest and can be safely constructed and operated is fully within the scope of MPSC’s review.  Mack, however, rejected including climate impacts in assessing Enbridge’s proposal and deferred to EGLE on assessing environmental concerns with Line 5. This may not be the end of the story, however.  What comes next is a decision by Enbridge, Nessel, the tribes, and environmental groups on whether to appeal portions of Mack’s decision to the three MPSC commissioners.

While there's still lots of uncertainty around the future of Enbridge's proposed oil tunnel, at least two things remain clear: 1)Gov. Whitmer has so far failed to take action to end the immediate threat of a catastrophic Line 5 pipeline rupture and 2)lots of folks who prioritize the Great Lakes, who see oil pipelines as incompatible with protecting them, who know Enbridge’s awful track record in Michigan, and who understand how Line 5 contributes to a warming planet while providing little benefit for Michigan residents, will continue paying close attention.

The battle to protect the Great Lakes from oil pipelines is being waged on multiple fronts.  At 1 pm this Friday, the Straits of Mackinac Alliance will explore in a webinar on how the courts and government agencies are playing a crucial role in deciding the future of Line 5.  Retired Judge Bill Crane and Leonard Page will lead the discussion.  Register for the webinar here.

The Straits of Mackinac Alliance is one of a trio of organizations that filed joint comments urging EGLE to reject permits sought by Enbridge to construct and operate the roughly four-mile-long Line 5 tunnel under the Great Lakes.  The Alliance, FLOW (For Love of Water), and the Straits Area Concerned Citizens for Peace, Justice, and the Environment cited inadequate legal authority, an incomplete application, and a lack of comprehensive state review in their objections.