August 5, 2015 - Leading organizations fighting to protect Michigan from a catastrophic oil pipeline rupture in the Great Lakes today called on Michigan Attorney General Bill Schuette and the Snyder administration to immediately begin taking action to stop the flow of oil through the Straits of Mackinac. 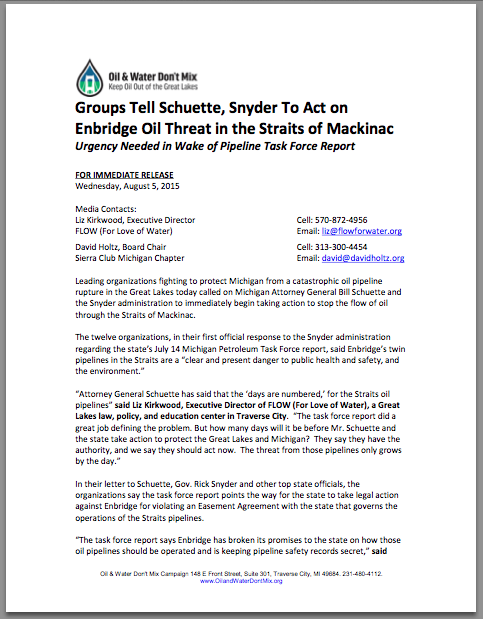 The twelve organizations, in their first official response to the Snyder administration regarding the state’s July 14 Michigan Petroleum Task Force report, said Enbridge’s twin pipelines in the Straits are a “clear and present danger to public health and safety, and the environment.”

“Attorney General Schuette has said that the ‘days are numbered,’ for the Straits oil pipelines” said Liz Kirkwood, Executive Director of FLOW (For Love of Water), a Great Lakes law, policy, and education center in Traverse City. “The task force report did a great job defining the problem. But how many days will it be before Mr. Schuette and the state take action to protect the Great Lakes and Michigan? They say they have the authority, and we say they should act now. The threat from those pipelines only grows by the day.” 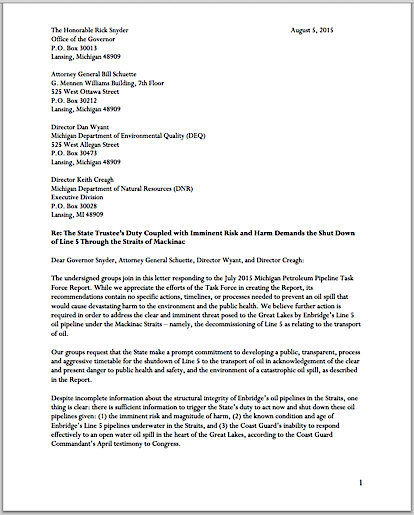 In their letter to Schuette, Gov. Rick Snyder and other top state officials, the organizations say the task force report points the way for the state to take legal action against Enbridge for violating an Easement Agreement with the state that governs the operations of the Straits pipelines.

“The task force report says Enbridge has broken its promises to the state on how those oil pipelines should be operated and is keeping pipeline safety records secret,” said David Holtz, Board Chair of the Sierra Club Michigan Chapter. “The state should not allow Enbridge to continue to transport oil through Line 5. There’s just too much at risk for the state to trust Enbridge, and Enbridge hasn’t earned the public’s trust.”

The twin Line 5 pipelines, constructed in 1953, carry 23 million gallons of oil through the Mackinac Straits every day. Line 5 carries oil to a refinery in Sarnia, Canada. Most of Michigan’s petroleum needs are met by oil carried through pipelines other than Line 5 that do not cross the Great Lakes.

The Enbridge pipelines in the Straits of Mackinac are a clear and present danger to public health and safety, and the environment.

Those who signed the letter to Schuette and Snyder include citizens from counties along the Straits as well as other local, state, and national organizations.

“Our groups want the state to immediately begin a transparent, public process with an aggressive timetable for shutting down the flow of oil through Line 5,” said Kirkwood. “We know the risk these aging Enbridge oil pipelines present, and we know the Coast Guard said in April that they cannot deal effectively with a rupture in open water of the Great Lakes. We also know the state has the authority to act to protect the Great Lakes and that time is not on our side with those oil pipelines. What we don’t know is when or if the state will act.”

Download the letter to Schuette, Gov. Rick Snyder and other top state officials