The meek response by Michigan’s top leaders to clear violations of Enbridge Energy Partners’ easement agreement with the state deepens concerns about a lack of leadership in protecting the Straits of Mackinac from a catastrophic oil spill, Great Lakes advocates said today.

On April 27, the Oil & Water Don’t Mix campaign received a response from Michigan Attorney General Bill Schuette and the Snyder administration to the campaign’s April 13 letter, documenting at least eight known violations of Enbridge Energy Partners’ lease agreement with the state for operating pipelines in the Straits of Mackinac.  Enbridge’s ongoing violations related to pipeline design threaten the very safety and health of the Great Lakes, and thus trigger the state’s duty to enforce its agreement with Enbridge.

The state’s letter points to the Michigan Pipeline Safety Advisory Board process to evaluate risks and alternatives to Line 5 in the Straits as proof that state officials are taking action to protect the Great Lakes from an oil spill.  This evaluation process, however, will not be complete until the summer of 2017 at the earliest.

“The state is not acting with any sense of urgency despite the clear and present danger these pipelines pose to the Great Lakes and shoreline communities.” - James Clift, Policy Director of the Michigan Environmental Council.

“We are deeply disappointed that Michigan Attorney General Schuette, Michigan Department of Environmental Quality Director Keith Creagh and Michigan Department of Natural Resources Director William Moritz failed to address the urgent issues we raised in our letter,” said environmental attorney Liz Kirkwood, Executive Director of FLOW (For Love of Water) in Traverse City. “Instead, they simply cited what is amounting to a two-year process with little certainty of producing an outcome that will protect our Great Lakes.  That is not acceptable to us and our communities and businesses that love and rely on the Great Lakes.”

In the Oil & Water Don’t Mix campaign’s April 13 letter, twenty-two partner groups and Patagonia, Inc., called on the state to terminate its easement with Enbridge because the risk to the Great Lakes is too great and no remedy exists for some of the eight specific violations of the easement and state law, which include:

“The state is not acting with any sense of urgency despite the clear and present danger these pipelines pose to the Great Lakes and shoreline communities,” said James Clift, Policy Director of the Michigan Environmental Council. “If the state truly takes 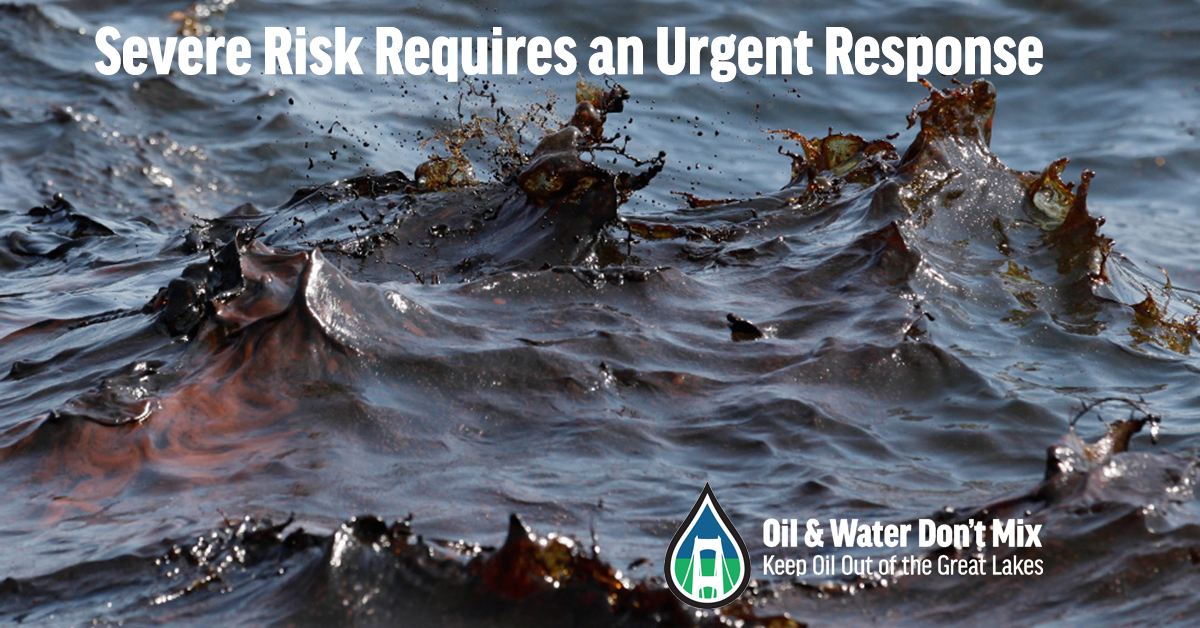 their responsibility as seriously as they say to protect the public trust resources of the Great Lakes—the crown jewels of Michigan’s environment and economy—state officials will enforce the violations of the 1953 legal agreement with Enbridge.”

“The culture of denial and delay continues to prevail among Michigan’s top leadership, unfairly placing the risk on the public and our communities,” said David Holtz, Executive Committee Chair of the Sierra Club Michigan Chapter. “It’s time to prioritize our public waters over powerful private interests.”

To date, more than 30 cities, villages, townships, and counties, and tribal governments, across Michigan have voted to call on the governor and attorney general to stop the oil flowing through the Straits, including Mackinac Island, Mackinaw City, and the cities of Cheboygan, Petoskey, Charlevoix, and Traverse City. Dramatic new research from the University of Michigan released in late March shows an Enbridge oil pipeline rupture in the Mackinac Straits could impact more than 700 miles of Lake Michigan and Lake Huron coastlines, as well as more than 15 percent of Lake Michigan’s open water and nearly 60 percent of Lake Huron’s open water.

“The culture of denial and delay continues to prevail among Michigan’s top leadership, unfairly placing the risk on the public and our communities.” - David Holtz, Executive Committee Chair of the Sierra Club Michigan Chapter

Thank you for your letter dated April 27, 2016, in response to our April 13, 2016 letter, which identified eight known violations of Enbridge Energy LLP’s 1953 Easement with the State of Michigan for Line 5 in the Straits of Mackinac, and the need for immediate action pending the Michigan Pipeline Safety Advisory Board’s review of risks and alternatives over the next 15 months.

Our April 13 letter and memorandum from twenty-two partner organizations of Oil & Water Don’t Mix campaign and Patagonia detailed the violations of the easement, public trust law, federal law, and the Michigan Environmental Protection Act. These state laws establish an affirmative duty for you to act as trustee and pursue these violations and prevent the associated imminent harm and high risk of a catastrophic oil spill from Line 5 in the Straits of Mackinac.

On behalf of Oil & Water Don’t Mix campaign, we are responding to your April 27 letter given the critical importance of this matter, and are formally requesting a meeting with you to discuss and clarify your response to the legal, scientific, and engineering issues raised in our April 13 letter. We are dismayed by your lack of urgency to take specific actions to enforce the present and ongoing violations of the state’s 1953 Easement with Enbridge. Instead, you point to the Pipeline Safety Advisory Board process to evaluate the Straits Pipelines’ risks and alternatives – a process that will not be complete until the summer of 2017 – and indicate that you are “requesting detailed information from Enbridge about the construction, operation, and condition of the Straits Pipelines and its compliance with the terms of the 1953 Easement.” The State of Michigan has been requesting this same information for over two years, and still does not have a definitive answer. In effect, your response letter dated April 27 maintains the status quo in favor of continued transport of crude oil in spite of the overarching ownership and public trust duties you have to prevent and reduce the imminent risk of harm from a pipeline leak, rupture, or release.

Your inaction appears to defer to and favor Enbridge over the interests and rights of citizens, businesses, and communities along hundreds of miles of Lake Huron and Lake Michigan who depend on this water, as well as the ecosystem, fish and aquatic habitat, and protected public uses. And yet, you clearly indicate that you take your “responsibility to protect the public trust resources of the Great Lakes” very seriously, and are reviewing actions that you can take to protect these paramount state and public interests.

Accordingly, on behalf of the Steering Committee for Oil & Water Don’t Mix campaign, we request that a meeting be scheduled with you on or before May 13, 2016, to discuss the State’s response to these Easement violations that are of tremendous significance and pose an unacceptable risk and consequence to Michigan and our Great Lakes. If you have any questions, or to schedule this meeting, please contact Liz Kirkwood at liz at flowforwater dot org.