Citizens Call to Shut Down Enbridge Line 5 by December 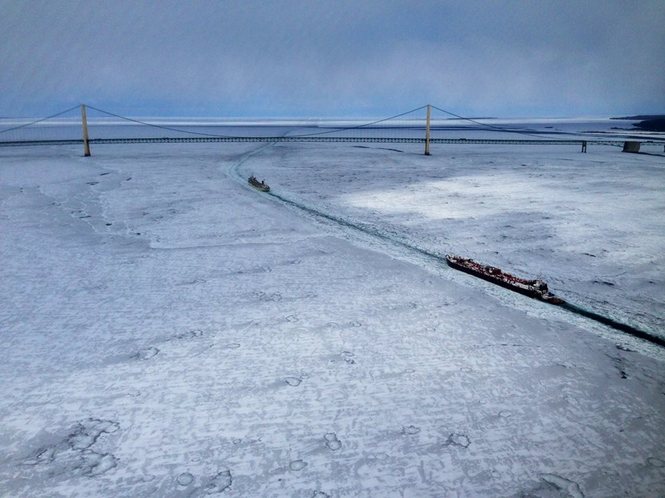 LANSING—With Coast Guard and oil spill recovery experts citing challenging winter conditions in the turbulent, icy Straits of Mackinac, citizens groups today demanded that state officials shut down the flow of oil through Enbridge Line 5 in the Straits by December to avoid a worst-case catastrophic spill.

“Winter’s coming and the icy Straits makes effective oil spill recovery virtually impossible,” said David Holtz, Chair, Michigan Chapter of Sierra Club. “When it comes to oil recovery, there is no good plan for the Great Lakes. It just makes sense that we stop the flow of oil through the Straits and that we do it by December before the ice comes.”

More than eight feet of ice can form in the Straits where two Enbridge oil pipelines are up to 200 feet below the surface.

"It just makes sense that we stop the flow of oil through the Straits and that we do it by December before the ice comes.” - David Holtz, Chair, Michigan Chapter of Sierra Club

Moreover, experts confirmed that the threat from oil pipelines in the Straits isn’t confined to winter. “Recovery operations in other times of the year would also be challenging due to strong winds and currents often found in the Straits,” Keck told Sierra Club.
“We feel a sense of urgency about stopping the flow of oil as an interim measure while the recommendations of the Petroleum Pipeline Task Force are being implemented, including a risk assessment and an alternatives study. Our fisheries, drinking water supplies, and local businesses are at risk,” said Rev. Deb Hansen, Concerned Citizens of Cheboygan and Emmet County. “Michigan’s executives have both the authority and responsibility to protect the Great Lakes. With no credible plan for a clean-up in the winter months, action is needed and needed now.”

Since the release of a report in July from a pipeline task force co-chaired by Attorney General Bill Schuette and the administration of Gov. Rick Snyder, there has been little action on the report’s recommendations. Snyder is expected this week to issue an executive order creating a new pipeline safety committee but no action is immediately expected on the report's major recommendation of looking at alternatives to transporting oil through the Straits pipelines. In the aftermath of the report release, Schuette had publicly predicted that "the pipeline's days are numbered."

Coast Guard, EPA and other government agencies are conducting an oil spill training drill Sept. 24 in the Straits. At last week’s workshop, an official with the National Oceanic and Atmospheric Administration, Dr. Eric Anderson, presented data showing that within 60 hours of a spill a wide area from the western shores of Lake Michigan to beyond Mackinac Island would be impacted by a pipeline rupture. A University of Michigan 2014 study said within 20 days of a major spill contamination could spread far beyond NOAA’s projected impact area.

“Enbridge officials are putting big bucks into marketing the idea that their pipelines in the Straits are safe.” - Jim Lively, Program Director, Groundwork Center for Resilient Communities

Coast Guard and other officials said it could take several days before full oil recovery efforts were in place following a major spill because of the time it would take for manpower and equipment to arrive on the scene.

The workshop was hosted by Tip of the Mitt Watershed Council and funded by the federal Pipeline and Hazardous Materials Safety Administration. Several Enbridge officials who attended assured the public that its 62-year-old pipelines through the Straits were safe. They have not, however, publicly released detailed pipeline safety inspection data.

After a six-inch breach last May in a Santa Barbara, California pipeline spilled 101,000 gallons and created a 9-mile ocean slick, journalists using the state’s open records act discovered that pipeline officials had earlier claimed in documents to government agencies that the pipeline was safe. Corrosion is suspected in that pipeline breach. At last week’s workshop, Enbridge acknowledged that more than 200,000 gallons of oil would spill into the Great Lakes within five minutes of pipeline ruptures to Line 5 in the Straits. The company is behind a current effort in the state Legislature to exempt oil pipeline safety records from Michigan’s Freedom of Information Act.

“Enbridge officials are putting big bucks into marketing the idea that their pipelines in the Straits are safe,” said Jim Lively, Program Director, Groundwork Center. “But the PR spin isn’t matched by transparency and accountability and common sense tells you the Straits are no place for oil pipelines."

“Given their terrible track record on oil spills, “ said Lively, “and the government’s acknowledgement that effective oil spill recovery in the Straits would be nearly impossible during ice conditions, it’s past time for the governor and attorney general to use their authority to protect the Great Lakes and shut down Line 5 before winter.”