Citizens groups are widely celebrating Gov. Gretchen Whitmer’s historic announcement today that she is taking action permanently revoking Enbridge’s Line 5 easement as she puts Michigan on a legal footing to end the threat of a catastrophic oil pipeline failure in the Great Lakes. 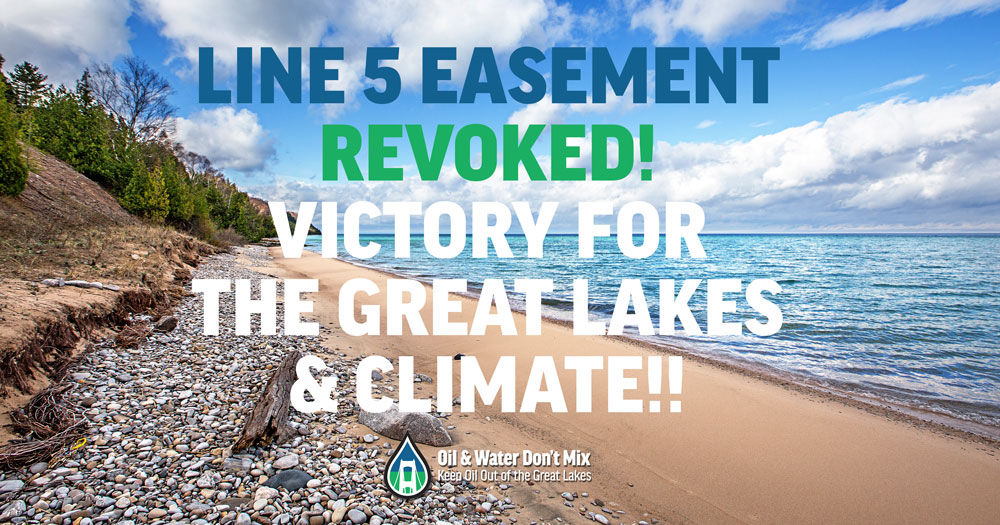 “Governor Whitmer’s decisive action today to shut down Line 5 fulfills her public trust duty to protect the Great Lakes,” said Sean McBrearty, campaign coordinator for Oil & Water Don’t Mix. “Enbridge has played fast and loose with their duty of care for these dangerous oil pipelines, and the governor is holding them accountable for their irresponsible behavior that threatens the Great Lakes every single day. Michiganders who care about the Great Lakes and our northern Michigan economy--and that’s certainly all of us--welcome the governor’s strong actions that put Michigan and Great Lakes first.”

Let's celebrate - but Enbridge is sure to fight this and we need to be ready. DONATE NOW

Whitmer’s decision gives Enbridge 180 days--until mid-May--to complete the process of shutting down Line 5. Attorney General Dana Nessel today filed a legal action in Ingham Circuit Court on Whitmer’s behalf to force the shutdown. Whitmer said the continued operation of LIne 5 is an “unreasonable risk,” citing Enbridge’s “persistent and incurable violations of the easement’s terms and conditions.” The new lawsuit will bring claims in addition to Nessel’s lawsuit filed in 2019, seeking the shutdown of Line 5, which remains pending before Judge James Jamo. 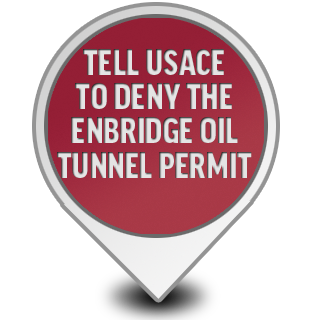 TAKE ACTION
Send a comment to tell the U.S. Army Corps of Engineers to deny the Enbridge oil tunnel permit.

The federal Environmental Protection Agency in June fined Enbridge $6.7 million after federal regulators said Enbridge failed to properly evaluate dents to pipelines along the company’s Lakehead Pipeline System, which includes the Line 5 pipeline that crosses the open waters of the Straits of Mackinac and through 400 other Michigan waterways.

“This is a huge moment for the thousands of people who have worked for over seven years to shut down this dangerous and polluting oil pipeline that threatens the Great Lakes and the climate,” said Kate Madigan, Director of the Michigan Climate Action Network. “Our Governor has shown once again that she puts the people of Michigan and the Great Lakes first and she is looking out for our best interests. Standing up to Enbridge - one of the largest and most powerful companies on the planet - takes courage, something that Governor Whitmer has in spades.”

Whitmer’s legal move today also follows an Analysis of the Enbridge Financial Assurances report to the State of Michigan by financial experts. The American Risk Management Resources Network documented the state’s potential financial liability from a Line 5 failure resulting in a catastrophic spill that could impact up to 700 miles of Great Lakes coastline.

"This decision to decommission Line 5 is a much-needed step to heal the environment and our place in it.” - Bill Latka, TC350 Coordinator

“Today’s decisive action by Governor Whitmer and DNR Director Eichinger represents a clear victory for the Great Lakes and the citizens and tribes of Michigan,” said Liz Kirkwood, executive director of FLOW (For Love of Water), the Traverse City-based Great Lakes law and policy center. “As public trustees of our waters, the State of Michigan is affirmatively upholding the rule of law and protecting the public’s treasured Great Lakes from the clear and present danger of an oil spill catastrophe from Enbridge’s Line 5 pipeline.”

Over the past five years, Enbridge has violated its easement agreement with the state by failing to disclose pipeline damage, corrosion, and numerous missing pipeline support structures. In 2016 it was revealed that Enbridge kept an Upper Peninsula oil spill hidden for 30 years, including the excavation of 825 tons of contaminated soil from the Hiawatha National Forest.

“It’s now crystal clear that we must ramp down fossil fuel use to address the climate crisis,” said Bill Latka, TC350 coordinator. “It’s not only the scientists ringing alarms, but we see the terrible effects of our overheating climate on human health in Michigan with floods, freak storms, and a rising and warming Great Lakes. This decision to decommission Line 5 is a much-needed step to heal the environment and our place in it.”