Governor tries to leverage U.P. heat, but gets a cold response

The Oil & Water Don’t Mix campaign responded today to Governor Snyder’s announcement that he would disregard the recommendations of his own Pipeline Safety Advisory Board, and keep the outdated and bent Enbridge Line 5 pipelines operating.

Snyder is ignoring his advisors despite the fact that to date, divers have inspected 48 anchor locations, 3 of which had bare metal spots and 42 had calcareous deposits because of gaps in the pipe's coating. This leaves 80 other locations uninspected because Enbridge has installed 128 anchors in total since 2002.

“Governor Snyder’s decision to disregard his own advisors on Line 5 is troubling, worse still is his use of the tired and false Enbridge talking point that shutting down Line 5 will cause a propane shortage in the Upper Peninsula,” said Sean McBrearty, OWDM Campaign Coordinator. “If Governor Snyder was really concerned with a propane shortage in the Upper Peninsula, he would instruct the Michigan Public Service Commission to develop a plan without further delay. Line 5 is only one of a growing number of serious threats to fresh water and access to water in our state. This clear pattern of inaction is astounding. There should be a backup plan in place for the increasingly likely event that Line 5 ruptures in the near future.” 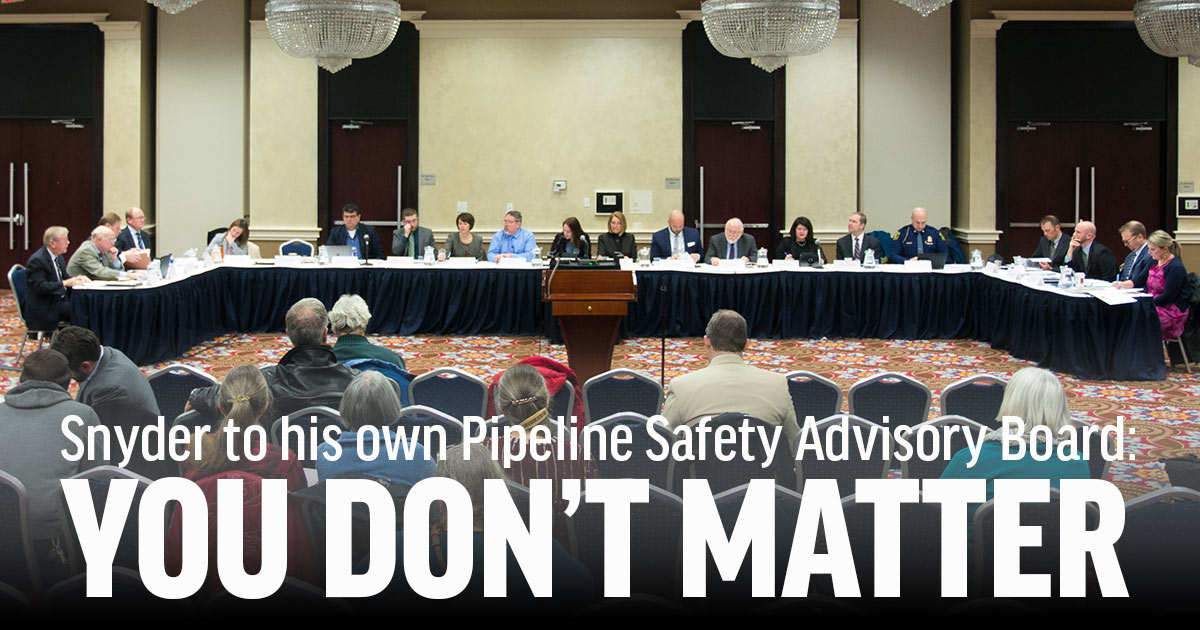 Oil & Water Don’t Mix released their plan detailing how exactly the state should go about decommissioning Line 5 earlier this month. This plan ensures Michigan's energy needs are met without disruption. “The 2017 Dynamic Risk report identified that a 4-inch pipeline from Superior, Wisconsin to Rapid River, Michigan could serve as an alternative.,” according to the OWDM Decommission Plan. “The report also found that the propane delivered to Rapid River, Michigan could be replaced with additional trucks and/or railcars between Upper Peninsula supply terminals. The report estimated that replacing the propane transport with trucks or rail would create 21 jobs in the Upper Peninsula and $1 million/year in earnings, and found that any resulting cost increases would be within the same order of magnitude as normal year-to-year volatility and seasonal fluctuations."

"Governor Snyder is attempting to sow worry and fear. The Upper Peninsula has several sources for propane and his pipeline study group knows that,” said Upper Peninsula resident and propane user, Pat Egan.

"If Governor Snyder was really concerned with a propane shortage in the Upper Peninsula, he would instruct the Michigan Public Service Commission to develop a plan without further delay." - Sean McBrearty, OWDM Campaign Coordinator

“Apparently there is no Plan B for UP propane. Line 5 must operate, without interruption, forever. Many folks who use propane in the U.P. are being used to justify the continued use of Line 5 which runs from Ironwood to Marysville,” said Gary Street, technical advisor for FLOW. “This does not need to be the case. They need assurance their propane supply is not dependent on Line 5. Several alternatives exist that do not include the use of Line 5. The State of Michigan must explore all the alternatives, and have a plan in place to assure a continued supply of propane when the day comes for the pipeline to be shut down. Shut down could occur due to a spill, a governmental mandate, or some other unforeseen problem.”

Part of Governor Snyder’s rationale for disregarding the Pipeline Safety Advisory Board and keeping Line 5 in operation was the reported results of recent hydrostatic tests that Enbridge was required to perform. “Gov. Snyder's own agency heads have repeatedly stated that Enbridge has lied about the information provided to the state, so why would the governor choose to believe Enbridge's test results?” said Anne Woiwode, chair of the Sierra Club, Michigan Chapter. “The governor has chosen to believe a company known for hiding the truth from state authorities and is keeping the Great Lakes at risk. There is no excuse for continuing to kick the can down the road. The Governor and Attorney General need to begin the process of decommissioning Line 5 now in order to protect the Great Lakes.”